Just ten days after winning the US Open, Egypt’s Amr Shabana suffered one of the biggest shocks of his illustrious career when he went down in straight games to unseeded Swiss opponent Nicolas Mueller in the first round of the Qatar Classic, the sixth PSA World Series squash event of the year at the Khalifa International Tennis & Squash Complex in the Qatar capital Doha.

It was the four-time world champion’s first opening round exit since December 2009, after reaching at least the quarter-finals in 13 successive Tour events since August last year. Furthermore, Shabana had reached the Qatar final in his last three appearances in the event!

Mueller played superbly well against the out-of-sorts Egyptian to reverse the result of their only previous meeting – ironically, in the first round in Doha twelve months ago. 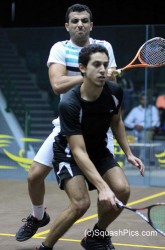 But there was better news for two of Shabana’s fellow countrymen later in the day: Tarek Momen got the better of fellow-Egyptian Omar Abdel Aziz in three close games, the 23-year-old from Cairo emerging triumphant 15-13, 11-8, 11-5 over qualifier Aziz in his first Tour meeting with his 28-year-old Cairo compatriot.

“I think we really played well today, both of us,” said Momen. “I’m happy with the way I played, even if I made a few too many errors.”

And Cairo-based third seed Karim Darwish successfully began the defence of his title with a 20-minute 11-2, 11-2, 11-2 win over Malaysian qualifier Kamran Khan.

The much-anticipated all-Finnish clash between Olli Tuominen and Henrik Mustonen fizzled out after just two minutes when the experienced Tuominen retired with a calf injury sustained earlier in the week. Qualifier Mustonen, who was winning his second conceded match in Doha in three days, will now go on to meet Darwish.

World number one Matthew, bidding to win the title for a second time since 2009, will now line up against Tarek Momen in the last 16 round. 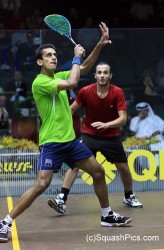 Siddharth Suchde delivered a second upset of the day to put out Egypt’s Mohd Ali Anwar Reda. After taking a two-game lead, the Indian qualifier looked set for a straight games win – but although Reda fought back to take the third, Suchde was unstoppable in the fourth to win 11-8, 11-6, 9-11, 11-1.

“It’s quite tough to come from the qualification, you have no easy matches nowadays,” said the delighted 26-year-old from Mumbai. “And then, you’ve got to adapt from the traditional court to the glass court. But the good thing is you’ve got no pressure on you at all.”

Suchde’s next opponent will be France’s sixth seed Gregory Gaultier, who was in no mood to allow another upset, dismissing 18-year-old Egyptian qualifier Mohamed Abouelghar 11-8, 11-3, 11-4.