Mosaad’s first near-two-hour KL clash was in the opening round where the third seed from Cairo was stretched to five games by fellow countryman Tarek Momen.

Londoner Grant had also had his fair share of lengthy battles on the all-glass court at the Berjaya Times Square shopping centre – his semi-final upset over event favourite Karim Darwish taking 80 minutes. 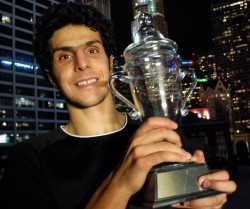 Mosaad started the better in the final and for Grant it was the same as it has been all week as he lost the opening game.

The world No13 also took the second and moved to nine-all in the third before Grant fought back and managed to squeeze the game on the tie break.

The No4 seed dominated the fourth, leading 10-4 before the tall Egyptian came back into it. After drawing level, Grant continued to hold the upper hand into the decider, but lost his concentration to allow his opponent a few points lead – from which Mosaad never looked back as he romped on to win the title for the first time.

The 11-6, 12-10, 12-14, 6-11, 11-8 victory make Mosaad the third successive Egyptian to win the KL crown – and gives the 24-year-old his second successive PSA Tour title after his triumph in the HKFC Meco Invitational earlier in the month in Hong Kong.

After surviving his third successive match lasting more than an hour in today’s semi-finals of the CIMB Nicol David KL Open in Malaysia, England’s No4 seed Adrian Grant will meet third-seeded Egyptian Omar Mosaad in a surprise final of the PSA World Tour International 50 squash event at Berjaya Times Square in the capital Kuala Lumpur.

Left-hander Grant faced Karim Darwish, the Egyptian favourite who had reached the semis without dropping a game.

And after taking the opening game, the world No4 from Cairo looked to be heading to his eighth win over the Londoner since 1999.

The 31-year-old former world No9, now ranked 12 places below Darwish, is celebrating his 29th appearance in a PSA World Tour final, where he will meet Mosaad.

The tall 24-year-old Egyptian, was also taken to four games in the other semi-final – where, much to the disappointment of the partisan crowd, he ended the unexpected run of local star Ong Beng Hee.

Unseeded Sarawak-born Beng Hee was unable to extend his KL run – which included the scalp of giant-killing compatriotMohd Nafiizwan Adnan, the surprise conqueror of second seed Mohd Azlan Iskandar in the first round.

The win takes the world No13 from Cairo into his second successive PSA Tour final – and one win away from his second title of the month after lifting the inaugural HKFC Meco Invitational trophy in Hong Kong.