It was a good day for the Egyptian contingent as round one of the Hong Kong Open concluded at the Hong Kong Squash Centre, on a day which saw all but one of nine qualifiers beaten and a popular home win in the women’s event …

Egyptian Tarek Momen made an impressive debut today in the Cathay Pacific Sun Hung Kai Financial Hong Kong Open when he beat Swiss opponent Nicolas Mueller in a high-paced battle to become the only qualifier to make the last 16 round of the seventh PSA World Series squash event of the year.

The 23-year-old from Cairo – who has never before played in the popular PSA World Tour event celebrating its 25th staging this year – is one of six Egyptians to secure a place in Thursday’s second round. 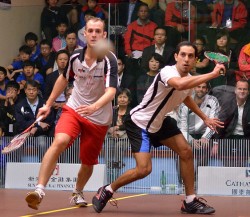 In fact, since the Hong Kong Open draw was made, Momen has leapt to 19 in the world rankings – now three places ahead of the Zurich-born 22-year-old whom he was facing on the Tour for the first time.

Mueller prevailed in a tight and prolonged opening game – but Momen struck back to prove his new ranking superiority over his unseeded opponent to win 15-17, 11-4, 11-8, 11-7 in 48 minutes.

The rising star of Egyptian squash will now face compatriot Karim Darwish. The second seed, ranked six in the world, took just 27 minutes to overcome Malaysian qualifier Ivan Yuen – the only player in the draw ranked outside the top 100 – 11-5, 11-5, 11-4.

Another all-Egyptian second clash will see four-time champion Amr Shabana take on Cairo colleague Hisham Mohamed Ashour. Shabana, the distinguished former world number one who is making his 14th successive appearance in the championship since 1996, was fully tested by event newcomer Mohd Nafiizwan Adnan before beating the Malaysian qualifier 11-9, 11-9, 3-11, 11-1. 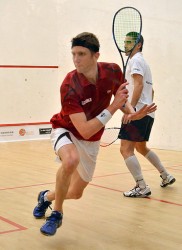 In the other upset of the day, Stewart Boswell doubled the Australian interest in the last 16 round when he defeated eighth seed Thierry Lincou in straight games.

Frenchman Lincou, always a favourite with the Hong Kong crowd since his title triumph in 2004, looked flat after his recent exploits in Macau, and although he briefly threatened a comeback in the third Boswell closed out the match 11-3, 11-9, 11-5 in 45 minutes.

And England’s Tom Richards was close to becoming another unexpected first round casualty when he twice faced match-ball against him from French qualifier Mathieu Castagnet.

After the first four games were shared, the Englishman led the way in the decider, but pure determination saw Castagnet come back and earn two match balls at 10-8. 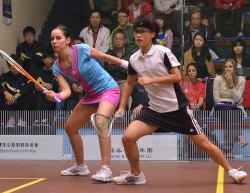 After a relatively comfortable first game against 17-year-old local qualifier Lee Ka-Yi, world number two Jenny Duncalf ended up being relieved and grateful to finish off the opening women’s match on her first match ball opportunity in the fourth.

The Hong Kong youngster, far from being overawed by her opponent or the occasion, really made a game of the second which she lost narrowly, then fired in a series of winning shots at the end of the third to pull a game back. She continued to impress in the fourth, and at 9-8 had an opportunity of the sort she’d been making, but tinned it.

Duncalf needed no second invite as she finished the match off, a match that ended up tougher than she, or anyone else, might have imagined.

Coach Rebecca Chiu was pleased with her protégé’s performance: “I thought she would be more nervous and make more mistakes than she did,” admitted Chiu, “but she played really well and was hitting some very good winners, and she had a chance to take it to five games.”

Duncalf’s next opponent is Malaysian Low Wee Wern who also faced a qualifier in New Zealand’s Kylie Lindsay. The rallies were well contested, mainly at the back of the court, but the Malaysian always had the edge, winning 11/4, 11/4, 11/7. 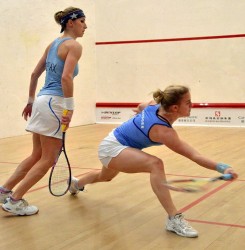 Camille Serme looked determined not to let her young Hong Kong opponent Liu Tsz Ling get a sniff of an upset, moving on with a 11/3, 11/3, 11/1 score line.

An upset – on paper, not necessarily on current form – came about in the following match as Emma Beddoes won her all-English match with 14th seed Sarah Kippax.

“It’s always weird when you play another English player,” commented the winner, “the crowd are very quiet, I don’t think anyone applauded anything for the first two games!”

Beddoes took those two 11/6, 11/6 but Kippax stormed back with 11/2 in the third. “She came out hitting winners, which I wasn’t expecting,” said Beddoes, “but I was pleased with how I regrouped to take the fourth.

“I’m very pleased, of course, I’ve been playing well and that’s my first ever win over Sarah after playing her a lot over the years, so it’s nice to do it in a big event like this. It’s the last tournament of the year for most of us so the further we can go the better.”

The shortest match of the day saw in-form Egyptian Raneem El Weleily breeze past German qualifier Sina Wall 11/6, 11/4, 11/7 in just 17 minutes, while her prospective opponent Madeline Perry needed just over an hour to see off the challenge of another in-form youngster, Dipika Pallikal.

“She was firing in winners from everywhere at the start,” said a relieved Perry, “I was expecting the ball to come back to me but it just didn’t. It was all pretty quick fire stuff, not many long rallies until the end, but it was always going to be close as she’s been playing very well.

“I felt that if I could stick in I would get some errors from her, which I did, but the fourth was poor from me, the fifth was good though – it was a good match to get me used to the court!” 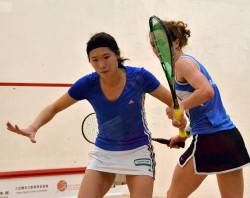 Where Lee Ka Yi had earlier delighted without being a realistic prospect for the second round, the Hong Kong crowd expected Joey Chan to progress and she duly delivered, repeating he Macau Open final victory just days ago, beating Aisling Blake again 11/6, 11/8, 11/6 to join Annie Au in round two.

“I was confident going into the match,” said Joey, “having already beaten her in Macau and playing on my home courts this time. I tried to stay calm and keep patient, but I felt she was tiring towards the end of the second so I started to attack more.

“I’m really happy to get through to the second round for the first time.” 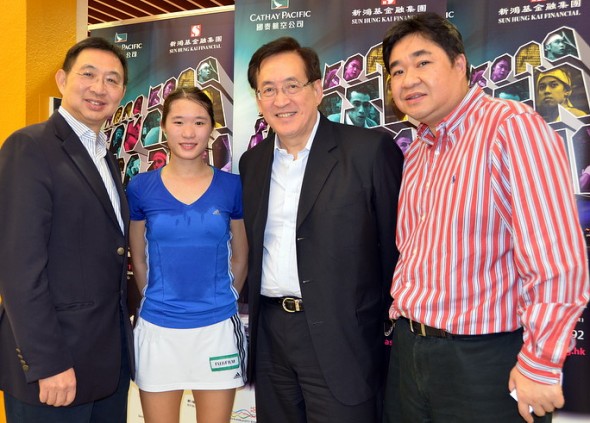 Round One (bottom half):

The second round – last sixteen – takes place at Hong Kong Squash Centre on Thursday, starting at 13.30.