The second day of quarter-final of the Delaware Investments U.S. Open at Drexel University in Philadelphia featured two marathon men’s matches in which Nick Matthew and Ramy Ashour progressed – Matthew at the expense of defending champion Amr Shabana –  while second and third seeds Raneem El Weleily and Laura Massaro – the reigning women’s champion – won through to the WSA semi-finals … 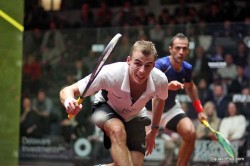 England’s Nick Matthew and Egyptian Ramy Ashour prevailed as predicted to reach the semi-finals of the Delaware Investments US Open in Philadelphia – but both players were taken the full distance before avenging defeats to lower-ranked opponents in their previous meetings.

Reigning world champion Matthew was in impressive form in the first game to take the lead – but Shabana, four times a winner of the world title, struck back to take the next two games, coming from behind in the third to take the lead after a tie-break.

The defending champion and seventh seed, looking as fit and fresh as he ever has, established a 7-4 lead in the fourth. But Matthew fought back, taking seven of the next nine points to level the match.

The Englishman maintained the upper hand to storm into a 6-1 lead in the decider, subduing his opponent and the crowd. Shabana struck back with some brilliant winners, and levelled at nine-all. Matthew moved to match ball on a stroke before a fabulous last rally saw both players covering all four corners of the court – Matthew finally leaving Shabana stranded at the front as he punched the ball deep for the winning point.

Shabana’s racket made its own way to the back corner in vain pursuit as the players embraced in mutual respect and the crowd rose in appreciation. 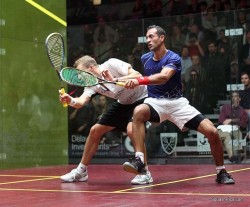 “I really don’t know how I did that,” said Matthew after the 92-minute encounter which saw the 32-year-old from Sheffield extend his Tour head-to-head record over the Egyptian to 11-9. “The last few points are a bit of a blur, I expected him to get up and chase that last ball down, he’d been playing so well!

“I knew he would come out strong, the shape he looks to be in has been the talk of the tour, so it wasn’t a surprise that he played so well – hopefully he’ll carry on and move up the rankings so that I don’t have to meet him in the quarter-finals anymore!

“At 2/1 and 7-4, I was down and out – but one of the things I pride myself on is being able to work out what needs doing if things aren’t going the way you’d like, and I was able to do that tonight.

“I had a lead in the fifth, but it always felt like I needed one more point to be really safe,” explained the former world number one. “Shabs and Ramy can switch the momentum of a match with a single shot, and, sure enough, he came back and nearly snatched it.

“I was lucky to win that in the end. I’ll take a little time to go through what went wrong and what went right, then think about preparing for the semi-final – I just hope the others have a long one too!” 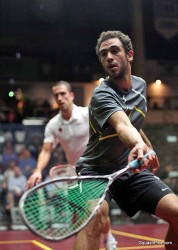 Matthew’s wish was later granted when his next Egyptian opponent was stretched to the limit in the last quarter-final, reversing the result of his previous meeting with Barker in the PSA Masters last December in India.

The Londoner took the first game aided by numerous unforced errors from Ashour. But the 25-year-old from Cairo took the second and third games, with left-hander Barker now struggling to contain his opponent’s mobility and shot-making.

Ashour held a slender advantage for the majority of the fourth game, but Barker kept plugging away and the Egyptian errors returned with a vengeance as Barker went from 5-7 down to level the match 11-7.

The decider was close all the way, but only from seven-all did the tension really arrive: Ashour dived in vain for a dropshot; Barker fell after a collision at the front of the court; Ashour found the tin with his favourite backhand volley, then buried one deep into the back corner; Barker scored with his opponent’s own favourite shot, then volleyed into the tin; Ashour powered the ball down the middle for a stroke – and it was match ball to the Englishman! 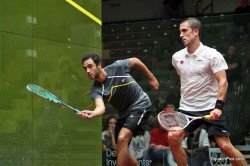 An Ashour winner and a Barker volley into the tin led to match ball to the Egyptian! Successful video appeals by both players then took the score to 11-all.

A chopped volley into the nick brought up a second match ball for Ramy – and, at the end of a long rally, Barker aimed for the nick but his volley clipped the tin, and it was all over after 75 minutes, the last 15 of which were pure drama and tension.

“You try to be entertaining and sometimes it doesn’t work so you have to revert to a basic game,” explained the winner. “I’m really proud of how I managed to win that. He played so well, but at times it looked as though there was something wrong with him – I think he was trying to fool me. It broke my concentration, but to win such a match gives me a lot of confidence.

“I just didn’t want to go home, that’s the thing,” concluded Ashour at the venue.

But later, the 2009 runner-up added on Twitter: “Clever tactic 2day from peter barker all credit to him. I’ve a lot to learn from that. Glad to win tho.” 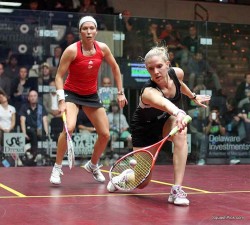 In the second half of the split quarter-final draw, Massaro dispatched her British compatriot efficiently after some close mid-game rallies.  Six unanswered points at the midway stage of the first game gave Massaro the lead, but the experienced Irishwoman fought back in the second, challenging right up to the latter stages of the game before some clinical finishing from Massaro doubled her lead.

The contest looked over as the Englishwoman continued to amass a dominant six point lead at the start of the third, but Perry refocused, and with a stronger length and increase in pace she fought back to just a point behind the new World No.2.  She was unable to keep momentum however, as Massaro played some neat finishing touches to take the match and ensure her semi-final place.

“I felt it was really close in the middle of the games,” said Massaro. “I had to try and stay focused and managed to get a run of points at the end of the first two.

“I started the thurd really well, keeping it off her volley, but I think I relaxed a bit thinking it was almost over and she fought back really well. I had to scrap for it in the end so I’m really pleased to come away with a 3-0 win.” 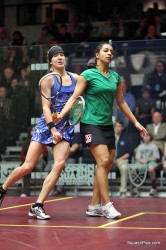 In a fast paced contest, El Weleily set about forging a lead with her typical Egyptian shot-playing style, but Brown’s retrieval rate kept her in the contest for much of the opening exchanges.  The Egyptian’s attacking play gave her the lead in after the first game, but a lapse in concentration saw an increased error-rate from the world No.3, with a number of tins allowed Brown to exert herself in a narrow tie-break victory.

Tied at one game all, El Weleily led for most of the game, until the relentless Brown fought from behind to earn game ball.  The Egyptian took the next three points in a row however to win the third, and similarly in fourth as, when it mattered, the Australian just couldn’t finish off the important points.

“That was just so up and down,” said a relieved El Weleily, “I could so easily have won or lost all of those games. She was playing well but I never think about what my opponent is doing, it’s always in my head and I sometimes think I’m fighting myself.

“It’s great to be in the semi-final, but now I need to clear my head and make sure I’m more consistent in the next match and not give away leads like I did tonight.” 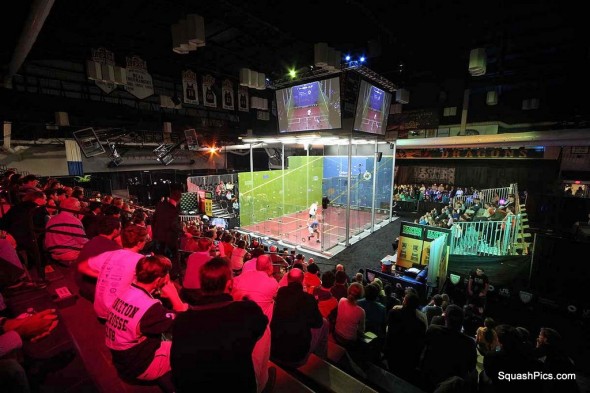