Semifinals day at the Delaware Investments U.S. Open at Drexel University, and the crowd were treated to a quartet of fine matches – two marathon women’s encounters which saw the top seed come back from the bring of defeat and the defending champion go out, followed by a pair of commanding performances from the men’s third and fourth seeds to defeat the top-ranked English pair. 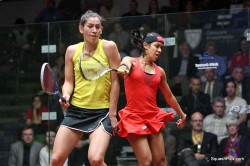 The semi-final round of the World Series Delaware Investments U.S Open Squash was a prime example of two ferociously competitive contests, that couldn’t have been any closer.

Top seed Nicol David was the first player to book a place in the final, but not before young qualifier Joelle King from New Zealand launched a thrilling comeback chase to force the match to five games and over 80 minutes.

The Malaysian six-time world champion David, had made casual work of the affair for the opening two games.  Steady, consistent, line-and-length squash was wearing down her opponent who didn’t seem overawed by the occasion, but didn’t seem to put up too much of a fight. 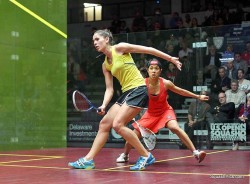 However, King struck back in the third with an increase in pace in both her hitting and movement.  David, having lost her last two events, was on the back foot and the Kiwi was rapidly coming back into the contest.  She claimed the following two games, and launched a dramatic assault on the deciding fifth game.

Having already claimed career-defining scalps earlier in the competition, against Nour El Sherbini and Jenny Duncalf, it looked like the biggest was yet to come from King as she raced to a 6-0 lead.  But her momentum stopped dead in it’s tracks as the experienced David calmly extended the rallies, moving her opponent from corner to corner and slowly chipped away at the deficit.

Sensing her lead deteriorating, King let one or two errors into her game but by the time David drew level at 6-all, the younger play looked extremely tired and was struggling to finish off her points.  She gained one more point, at match ball down, as the reigning world champion won 11 points in 12 to progress to the 2012 final.

After an 83-minute marathon, David will have been pleased to see the subsequent semi-final also extend past the hour mark asRaneem El Weleily sought revenge against the player who not only clinched victory in Carol Weymuller final two weeks ago, but in doing so, also stole her world No.2 ranking place. 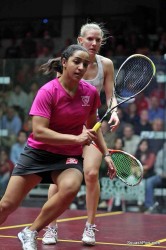 Laura Massaro, last year’s U.S. Open champion, raced to an early lead in the match thanks to a vast number of errors early on from her opponent.  As the match wore on however, El Weleily’s eye for a drop became settled and she was forcing Massaro into the front with some deceptive short attacks that are ubiquitous with Egyptian players.

Massaro closed out the first game, but El Weileily returned to court with momentum behind her to win the second.  The Englishwoman kept up with her pace in the third and led 9-7 before the Egyptian came from behind increase her lead with four outright winners. 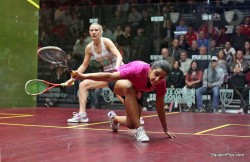 El Weleily’s short game was getting her out of trouble when needed, but she levelled Massaro’s fourth game lead to 9-all demonstrating some excellent length play, before tinning her first attempt at gaining match ball.  The No4 seed capitalised on the mistake to take the fourth game in the tie-break to force the deciding fifth game.
The young Egyptian stormed back into the contest and rose to an enviable 7-1 lead.  Massaro attempted to chip away at the deficit but the damage was done and El Weleily finished the contest in emphatic style with an overhead volleydrop to ensure a new U.S Open champion from tomorrow’s final. 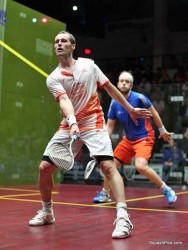 After overturning recent form, it will be third seed Gregory Gaultier and No4 seed Ramy Ashour who contest the unexpected final of the Delaware Investments US Open following the exit of the two top seeds from England in the semi-finals of the PSA World Series squash event at Drexel University in Philadelphia.

“I felt really good right from the start,” said Frenchman Gaultier after a comprehensive straight games win over top seedJames Willstrop in the first men’s semi-final – his first win over the world number one this year.

“I felt that James wasn’t quite there, a little slow … or maybe I just played too well, I don’t know!” 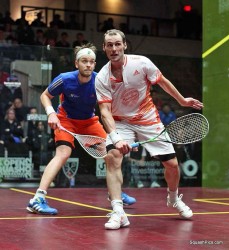 Gaultier was ahead throughout and always seemed to be in charge of the rallies. The Englishman came into the match following three 80-minute-plus matches in a row – but it was a fine performance from Gaultier that earned the 29-year-old from Aix-en-Provence a well-deserved 11-7, 11-2, 11-8 win, and a place in the 46th Tour final of his career.

“He’s been playing so well and making all the finals,” added Gaultier, who lost a 118-minute battle with Willstrop last month. “And in the end it just takes its toll on your body – I’ve been there myself!

“I analysed my matches at the British Grand Prix two weeks ago, and adjusted a few things.

“It was fantastic to win a major event like this in 2006, and I’m pleased to be back in the final,” said the world No3. “It would be great if I could win it again – I just hope the next two play for five hours!” 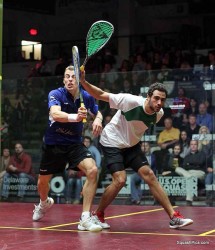 In fact Ashour claimed the other place in the final in 74 minutes – with a performance that was entirely different from his display in the previous round when he beat Peter Barker after saving a match-ball in the decider.

His opponent was another Englishman Nick Matthew, the second seed bidding to reach a second successive final.

Matthew, the world No2, took an early lead and increased it to 10-6. Ashour took the next five points and eventually took what proved to be a crucial lead 15-13 on his third game ball. 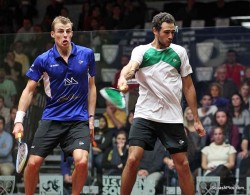 Matthew managed to contain his opponent in the second game to draw level. But Ashour – who boasted an 11-7 Tour record over his rival before the match, but lost the most recent encounter in the British Open in May – led throughout the next two games.

The 25-year-old from Cairo clinched victory with a trademark volley drop that brought the appreciative crowd at Drexel University to its feet one final time.

“I didn’t make the mistake I made yesterday, of concentrating on what my opponent was doing. It’s always about how I deal with it mentally, and I was happy with that too tonight. 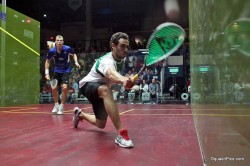 Matthew reflected on the match: “It’s not the first time I’ve lost a lead like I had in the first to Ramy, so he must be doing something right. I thought I’d won it on a video review – that didn’t go my way – but I still had four more chances.

“I think I should have won the first and if I’d gone 2/0 up it might have been different.

“He played well though – he adapted to tonight’s slower conditions better than me, and my defence wasn’t as good as Pete’s last night. The work he made me do took its toll and I faded a bit in the fourth.

“In the end he got on top and deserved to win.”

Matthew was succinct on Twitter later: “I could make excuses as to why I didn’t win but the honest truth is the better player won tonight. Well played Ramy hope it’s a good final.”