Massaro almost failed to make it past the first round of the Gold Series event after going two games down against Low Wee Wern of Malaysia.  She managed to turn the match around to win in five, but again lost the first game against Annie Au in the quarter-finals before showing her resilience to battle past the No.6 seed from Hong Kong.

In the semis, Massaro faced Alison Waters, a dangerous prospect following her defeat of Madeline Perry in the first round, followed by the shock win over world No.1 Nicol David.  Massaro played a steady game however and dismissed the threat of her compatriot in straight games to set up the final against world No.2 Raneem El Weleily.

The Egyptian had faced a similarly tough route to the final when, after beating Jaclyn Hawkes in straight games, she too had to battle back from a two game deficit to overcome Joelle King of New Zealand. 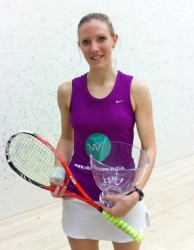 She then defeated fellow-Egyptian Nour El Sherbini, banishing memories of her British Open loss at the hand of the teenager, to make her second consecutive WSA World Tour final after winning the CIMB Malaysian Open last week.

Massaro came out on top after a closely fought first game, and extended a strong lead in the second as her opponent struggled to find any consistency with her short game.  Short of ideas, El Weleily succumbed to defeat in straight games, and Massaro’s win will really increase the pressure at the top of the WSA World Rankings  [UPDATE: Massaro swaps places with El Weleily in the October rankings, 1 Nicol David, 2 Laura Massaro 3 Raneem El Weleily]

Next week, both players will feature in the World Series US Open in Philadelphia.  Massaro is seeded fourth for the event and is due to play local entry Kristen Lange whilst El Weleily, second seed, will face Low Wee Wern of Malaysia.  Top seed Nicol David will face a yet to be confirmed qualifier, and third seed Jenny Duncalf will play experienced Australian Rachael Grinham.  Round one begins on the 8th October. 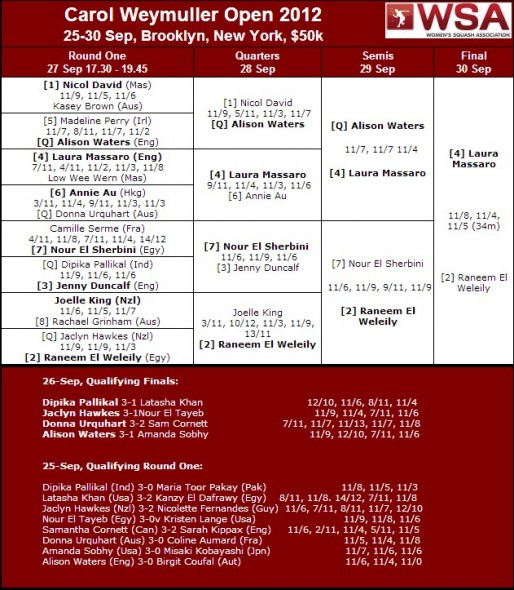