Mariam Ibrahim Metwally became the youngest – and the only unseeded – player to claim a place in the quarter-finals of the WSF Women’s World Junior Individual Squash Championship in Boston, USA, after upsetting Egyptian compatriot Kanzy Emad El-Defrawy in the fourth round of the World Squash Federation championship at Harvard University.

And, as the competition heads to its climax, the 14-year-old is joined by four Egyptians in the last eight – two of whom are sure to reach the semi-finals – plus US hopes Olivia Blatchford and defending champion Amanda Sobhy, together with England’s European champion Emily Whitlock. 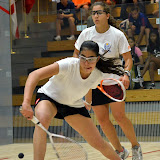 “I’ve played her in Egypt and I’ve beaten her once before – but lost twice, so we knew each other’s games,” explained the youngster to the official website www.worldsquash.org/worldjuniors2011 afterwards. “I knew it was important to get the first few points in the games, to get a lead as that would make her nervous, and I managed to do that in the first two.

“When I slipped in the fourth, it really hurt – but I remembered all my training and told myself that this chance would only come once, so to forget the injury and get back onto court. And in the end it was ok.

“I’m so pleased to be in the quarter-finals. I never expected it but it feels great!” 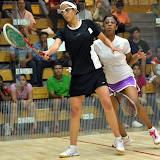 But Egyptian favourite Nour El Tayeb had to come through a more testing quarter against India’s reigning Asian Junior champion Anaka Alankamony. After a surviving a close first game, and recovering from the loss of the third, world No17 El Tayeb finally emerged triumphant after 36 minutes in a 13-11, 11-6, 9-11, 11-3 scoreline.

“It was so hard,” said 18-year-old who is seeded to reach the final for the third year in a row – but expected to win the title for the first time. “She gets everything back!”

Egypt’s Salma Hany also claimed an unexpected place in the last eight – and disappointed the local crowd by ending the run of US outsider Haley Mendez, the unseeded 17-year-old from New York who removed Australia’s 5/8 seed Tamika Saxby in the previous round. 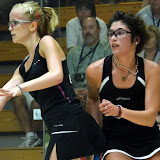 “It was comfy in the first two, everything was going fine, and I got a few points up in the third too,” explained the 17-year-old from Colwyn Bay in Wales. “Then I looked at the bench and realised my Dad (coach and former England international Phil Whitlock) wasn’t there and I know it sounds weird but I began to feel homesick!

“I probably would have played the same if my Dad had been there, and Fi (Geaves) got me through it after I’d lost the third, but I just felt a sort of slow panic. All credit to her though, I didn’t think she was there in the first, but she came back so strongly and played so well – we don’t see the Kiwi girls on the circuit much and I’d heard she was good, but I’d really met my match for running things down for a long time on there.”

“I really don’t know how I won that, I was sure if it had gone to a fifth I was going to lose . it’s just pure relief, that’s all,” concluded Whitlock.