England again has the top two players in the Dunlop PSA Men’s World Squash Rankings following Nick Matthew‘s return to No2 behind fellow Yorkshireman James Willstrop in the new May list.

Willstrop has extended his lead at the top of the rankings to more than 300 points after reaching last month’s final of the El Gouna International Open, the third PSA World Series event of the year, in Egypt.

A semi-final berth in the Red Sea resort was enough to move Matthew ahead of Frenchman Gregory Gaultier – but his Egyptian victor Ramy Ashour went on to beat Willstrop in the final and rises to fourth place in the list.

England’s Daryl Selby recorded his first Tour success for more than a year at the Grasshopper Cup in Switzerland – and is rewarded with a return to the world top ten.

Alister Walker, a former Englishman who switched his allegiance to the country of his birth last June, celebrated two title successes last month and his fourth since representing Botswana.

The New York-based 29-year-old brushed aside all opposition in the Berkshire Open in the USA, then again justified his top billing last week in Dublin to win the Cannon Kirk Homes Irish Open. Walker leaps five places to No13, his best ranking for more than two years.

Spaniard Borja Golan has also enjoyed a successful recent six weeks on the Tour – following victory in the Manitoba Open in Canada in March by semi-final berths in the Berkshire Open and Irish Open.

The 29-year-old from Santiago de Compostela, fighting back to top form after a career-threatening knee injury, makes a welcome return to the world top 20 for the first time since 2009.

Golan’s return to the top flight also means that nine nations are now represented in the world top 20. 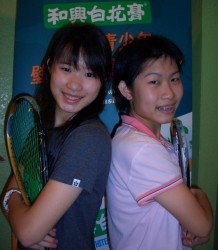 It’s a good for Hong Kong squash as its top two WSA players both celebrate career highs in the latest May rankings.

Annie Au moves up one place to no.6 for the first time. Au reached the semi finals last month in Texas and previously reached her first World Series Final at the end of March. HK no.2 Joey Chan moved up 3 places to a career high of no.16 after winning her 5th WSA title on home soil at the Buler Challenge Cup with a big win over former world no.1 Rachael Grinham in the final.

Madeline Perry reached the final of the Irish Open in Dublin last week and swaps places with Laura Massaro once again to return to no.3. Both players were former champions in Ireland but couldn’t stop the steamrolling comeback of Alison Waters. Waters has now won the three tournaments she has played since her comeback and moves up 4 places to no.28. With no points to defend for the rest of the year Waters will no doubt continue her climb back up to the top.

The top 2 remain unchanged with Nicol David now up to an incredible 70 months at no.1 while Jenny Duncalf makes it 27 months at no.2.

There were career highs elsewhere in the top 50 for Emma Beddoes at no.22, equalling her best-ever.Lauren Selby moves up 2 places to no.41, Miranda Ranieri up to no.43, Olga Ertlova up 3 places to no.44, Coline Aumard up to no.46, Liu Tsz-Ling up to no.48 and Wales’ Tesni Evans makes her top 50 debut at no.49. 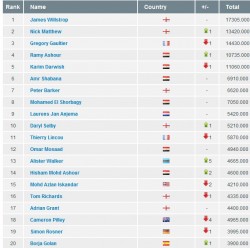 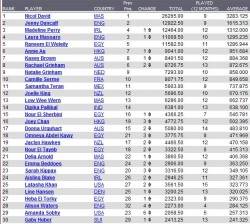