Boasting a $325,000 prize-fund – the second biggest in the sport’s history – the Qatar PSA World Championship is being hosted by Qatar for the third time, following previous stagings in 1998 and 2004, and is being held at the Khalifa International Tennis & Squash Complex. 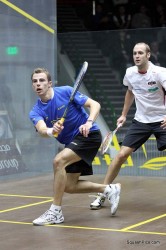 Bidding to become the first player since the legendary Pakistani Jansher Khan to win the world title three times in a row, Matthew despatched Mueller 11-8, 11-6, 11-4 in 36 minutes to notch up his 13th consecutive win in the event since losing in the 2009 quarter-finals in Kuwait.

It took almost three times as long for the Yorkshireman’s next opponent to earn his place in the second round. In one of the most dramatic matches seen on the Doha courts, Australian Zac Alexander finally emerged victorious 11-9, 8-11, 5-11, 13-11, 14-12 in 97 minutes over Welsh qualifier Peter Creed. 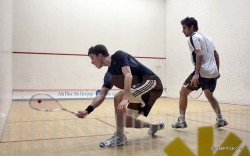 In his fourth successive attempt to win a first round match in the championship, English qualifier Joe Lee progressed to the second round for the first time after upsetting Pakistan’s higher-ranked Aamir Atlas Khan 11-6, 24-22, 11-6 in 66 minutes – the second game being one of the highest-scoring games since the PAR-to-11 scoring system was introduced on the PSA World Tour in September 2004.

“The second game was a real crowd pleaser with the advantage swinging back and fore,” said tournament MC Robert Edwards.

Lee agreed that winning the middle game was essential: “I knew that the second would be crucial, as it was nearly as long as playing three games instead of two,” explained the London-born 23-year-old to www.squashsite.com “And one-all would have make a massive difference.” 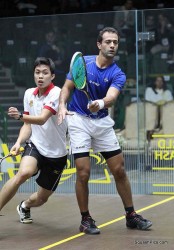 The world No48 from Surrey now faces No7 seed Amr Shabana, the illustrious Egyptian who boasts four world championship titles. “Now, Shabana,” added Lee. “I’m so happy – that was one more incentive to get to the next round, just to have a chance to try and have a shot at him!” 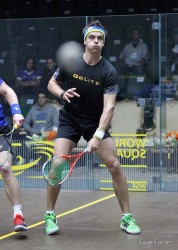 “It was a pairing that seemed to promise a tough match – and it started as expected, with the score reaching seven-all,” explained Edwards. “From that moment on, a very relaxed Anjema steamrolled his opponent to run out an 11-7, 11-2, 11-4 winner in just 22 minutes. Certainly Kemp seemed to be out of sorts and never got his big game into play.”

Anjema himself told his Twitter followers later: “My 22-minute match was twice as short as my warm-up today! A lot more intense, however. Happy to get through to the second round.” 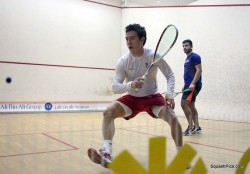 Third seed Gregory Gaultier claimed another lightning-fast passage through to the second round, dismissing Egypt’s Mohammed Abbas 11-5, 11-5, 11-1 in just 26 minutes. Runner-up for the third time last year, the world number three from France is enjoying a fine run of form currently – and moves on to meet Colombian Miguel Angel Rodriguez for a place in the last 16.

“I’m so happy, it’s the first time a South American player has reached the second round of the worlds – so I’m feeling I have to play well for my continent!” said Rodriguez.