England’s world number two Nick Matthew crafted a convincing victory over Henrik Mustonen in the first round of theAllam British Open Squash Championships in his quest to secure a record fourth title in the PSA World Series event at the KC Stadium in Hull in the English county of Yorkshire.

The Yorkshireman will now face Laurens Jan Anjema from the Netherlands in the second round after beating the Finnish qualifier 11-8, 11-7, 11-3 in 31 minutes. 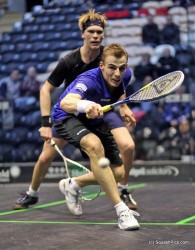 Mustonen came out fighting in the early games, forcing the defending champion to make a series of basic errors.

But the omnipresent Brit began to own the court as the match progressed and by the third game had begun a clinical assault on his valiant Finnish challenger.

Matthew first triumphed at the historic tournament in 2006 and went on to reclaim the title in 2009. Last year he took top prize for a third time in an action-packed final against current world number one Ramy Ashour at the London 02 Arena, at the inaugural staging of the Allam British Open.

“He came out to win, full credit to him for that,” said Matthew, who acknowledged that it was “amazing” to be playing in his home county. “I’m so pleased to be here and hopefully have a lot of local support.”

Reda reached game ball first, but Barker saw him off 12-10, 11-9, 11-4 with some tight and accurate hitting that allowed the Brit to dominate the latter stages of the match.

The delighted Londoner said afterwards: “I felt that I started a little slowly but improved as the match went on.” 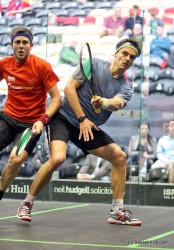 Anjema started at high tempo against Ryan Cuskelly – which seemed to catch the Australian by surprise as the Dutchman raced into a two-game lead. Cuskelly slowed down the pace effectively in the third to pull one back but Anjema steadied himself and regained the momentum to take the match 3/1.

Anjema was also complimentary about the event: “It’s beautiful venue, really cool to be playing in a football stadium.” 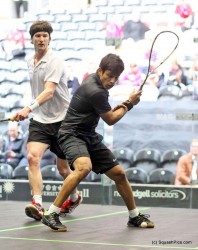 India’s Saurav Ghosal proved too strong for English qualifier Jonathan Kemp in the opening match at the KC Stadium.

The game was played at a frantic pace with 32-year-old Kemp going for some spectacular shots but finding it difficult to outmanoeuvre his quick opponent.

Commenting after the match, the Yorkshire-based Indian number one said: “Happy to win 3/0 after a close match against a very talented and dangerous opponent today – definitely some fast and furious points on there!” 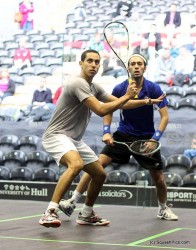 The all-Egyptian affair between Tarek Momen and Marwan Elshorbagy was a typically attacking match with both players exchanging daring shots in the opening stages. The pair went shot for shot with Momen just edging the first two games 11-9 before running away with the third 11-4 in a match that lasted just short of half an hour.

Commenting on the set-up, Momen enthused: “I really like the court in the middle of a football stadium!” 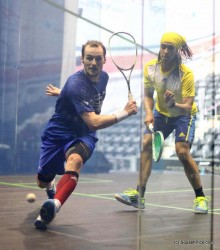 The Frenchman looked in sharp form as he despatched Walker, from Botswana, in straight games 11-6, 11-9, 11-1. Gaultier attacked throughout and dominated the middle, much to his opponent’s frustration.

Afterwards Gaultier commented: “It was a really tough first few games played at a good pace. I’m happy to get the win and would really like to win the tournament again although it is so tough at the moment with so many quality players.” 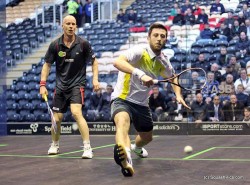 England’s Daryl Selby made his way through to the second round in a tough game against Finland’s Olli Tuominen. The two were neck and neck in the first at 5-5 before a surge of attacking play by Selby took him to a 10-5 lead before he closed the game out 11-6.

The second was closer with both players attacking to take the game to eight-all. Selby upped the pace and played a superb back hand drop to reach game-ball before taking the second 11-9.

Tuominen took a quick 5-0 lead in the third before Selby refocused to level at 5-5. The Finn moved on to game-ball, but Selby sneaked a 13-11 win to take the match in three.

In the last game of the day Karim Darwish, who missed last year’s event through injury, looked in good form as he sailed past compatriot and qualifier Andrew Wagih Shoukry in just under half an hour.