Defending champion and world No1 Nick Matthew eased through today’s first round of the PSA World Open inRotterdam to set up a second round clash with Tarek Momen, the Egyptian ranked outside the world top 25 who beat the Englishman in this month’s Qatar Classic.

Yorkshireman Matthew recovered from 5-8 down in the first game at Victoria Squash in the Dutch City of Sport to defeat Italian qualifier Stephane Galifi 11-8, 11-1, 11-3 in 35 minutes.

“I’ve had a good build up to the World Open,” said Matthew later. “Losing early in Qatar, although unplanned, did give me a bit more time to prepare. I’ve had a bit of nervous excitement in the build up to this. I’ve felt that edge in my training and was maybe a little too eager in the first game today. I had to settle into a rhythm, get used to the court and once I got the feet moving and was able to express myself, I felt good in my game.”

Of his France-based opponent, Matthew added: “He’s a wily old fox. He uses the court, slows the ball down and plays to his strengths well. He’d had a hard match yesterday and was probably more used to the court than I was at first. But once I’d got the pace up his legs weren’t quite there.

“I’m pleased that we’ve got a good support here – my coach and physio are both here, and my parents are on their way here too. There’s no reason why we can’t do well. I’ve been here a few days and feel pretty good.” 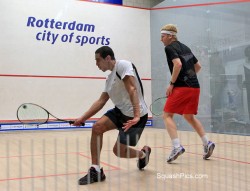 Tarek Momen, whose shock straight games second round victory in Doha ended a run of ten successive final appearances by Matthew, needed 53 minutes to beat Tom Richards 11-9, 8-11, 11-1, 11-5 – avenging his US Open defeat by the Englishman last month in Philadelphia.

“I think I played really well today,” said the 23-year-old from Cairo. “We played three weeks ago and he beat me, so I’m glad I got my revenge. It’s an honour to play in the World Open and it’s a great marker for where your game is at this point in the season. I hope I do much better this year – last year didn’t go so well, so I’m looking forward to staying in the competition for longer!”

In the opening match of the day, two-time champion David Palmer took an hour and a half to fend off the challenge of Scotland’s Alan Clyne – and lead four Australians into the next round on the day.

After Palmer’s marathon escape, fellow former world champion Thierry Lincou also showed that there is still life in the old dog! Palmer and Frenchman Lincou share two significant achievements: Both are marking their 12th successive appearances in the World Open, and both recently celebrated ten unbroken years in the world’s top ten.

“I was expecting a tough match – he was a bit more used to this court and this atmosphere, whereas this was my first match here,” said the 35-year-old from Marseille later. “Sometimes it’s tricky for the main draw players to come here and get stuck in on these courts.

“The glass side is a bit tricky. But Shawn has an unusual style and it’s tricky to play against. I really had to play my best squash at points to push him into mistakes because he was really hurting me at the front. I had to keep focussed to the end.

“I’m very pleased with my win overall. I can only play better from here so I’m looking forward to the rest of the week.” 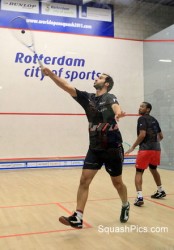 Simon Rosner made sure of German interest in the second round after a 12-10, 11-6, 11-3 victory over Germany-based South African qualifier Clinton Leeuw.

“It’s never easy in the first round – I’m really happy to get through in three, which means that I’m fit and ready for next match,” said Rosner, the top-ranked German. “In the first game, Clinton came out firing – I didn’t know where to look, he was cutting the ball out well.

“It was surprising in the first but I got into the game better and managed to take control of the match. I know his game a bit as he also lives in Germany, so we’ve played a couple of times before. I’m really enjoying Rotterdam – it’s only a three-hour drive for me so that’s a nice change to be able to drive to the tournament.”

After Leeuw’s loss, Stephen Coppinger made sure there would be South African interest in round two as he beat Chris Simpson 11-1, 12-10, 11-8. The 27-year-old from Cape Town now meets another Englishman in seventh seed Peter Barker, who eased past less-than-fully-fit Aussie Aaron Frankcomb 11-4, 11-1, 11-4.