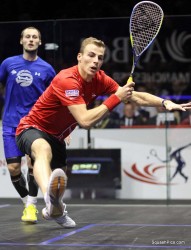 England’s Nick Matthew survived a dramatic AJ Bell PSA World Squash Championship final at Manchester Central in Manchester, beating French rival Gregory Gaultier to claim the trophy for the third time and become the first player since 1977 to clinch the title after squandering a 2/0 lead.

The 111-minute triumph, fittingly the longest match of the championship, means that the 33-year-old world number four from Sheffield joins a select and distinguished group of players – Australian Geoff Hunt; Pakistanis Jahangir Khan andJansher Khan; and Egyptian Amr Shabana – who have three titles to their name. 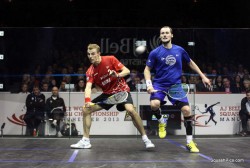 Gaultier, the world number two from Aix-en-Provence, also becomes a member of a notable trio of fellow former world number ones – including Pakistan’s Qamar Zaman and Australian Chris Dittmar – who have been finalists four times but have never won the title!

Matthew went into the match 2/1 ahead of his opponent in previous meetings in the World Championship, but 10/15 down in career-long Tour clashes. It was their seventh Tour encounter of the year – the most recent being the US Open final just two weeks ago when Gaultier crushed the Englishman in straight games. 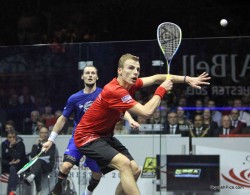 Matthew was clearly after revenge – and, before a capacity and partisan crowd at Manchester Central, fought back from 4-7 and 6-9 down in the opening game to take the lead after 26 minutes after being awarded a stroke. Gaultier questioned the decision via the fourth official, using ‘Video Review’, but the decision was upheld.

The second game followed a remarkably similar pattern, with Gaultier again leading 7-4, then 8-6, before a series of winners from the Yorkshireman’s racket took Matthew to game ball – and an almost identical shot to the one at the end of the first game which again led to a stroke for Matthew. Gaultier’s appeal to the fourth official again confirmed the decision! 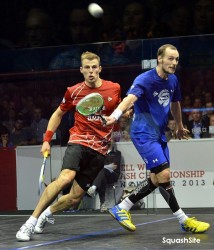 The third game saw a revival of fortunes for the in-form Frenchman. In a sequence of incredible rallies, Gaultier went from 6-7 down to game-ball at 10-7.

Incredibly, Matthew reclaimed the advantage, winning four points in a row – the first of which Gaultier commendably called down – to reach match-ball.

With the audience on the edges of their seats, Gaultier levelled with a winning drop shot, then took the next two to clinch the game. 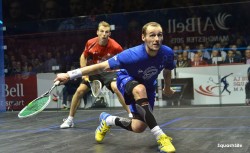 Gaultier was on fire in the fourth, winning six points in succession from two-all before sending a service return into the nick at 7-10 to level the match.

The decider saw a noticeably focussed Matthew come into the court alongside a weary-looking Frenchman. As the game developed, it became increasingly clear that Gaultier had little more to give – and Matthew, urged on by the excited crowd, scored winner after winner before a tinned response from the Frenchman on championship point gave the Englishman the title 11-9, 11-9, 11-13, 7-11, 11-2 after 111 minutes. 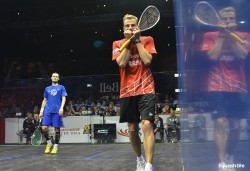 “That fourth game was a bit of a blur,” Matthew conceded to MC Andy Kay when asked what happened midway through the match.

“It took a lot of strength to come back from that.

“‘t they! I played Greg once in Toulouse – but never thought I’d experience such a fantastic home crowd response like this for me!”

When reminded of his last battle with Gaultier in Philadelphia, Matthew agreed: “He gave me a lesson then. 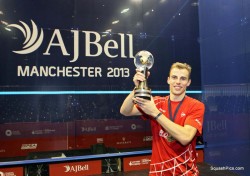 “Tonight’s match was tough – such a mental battle,” added Matthew, who had never before lost to Gaultier after leading by two games.

“I could gladly retire now, after three finals and three wins – but I won’t do!

“Never in my wildest dreams did I think I would achieve this!”

Matthew becomes the oldest world champion since 1980, when Australia’s Geoff Hunt won the title for the fourth time in a row, aged 33 years and six months. 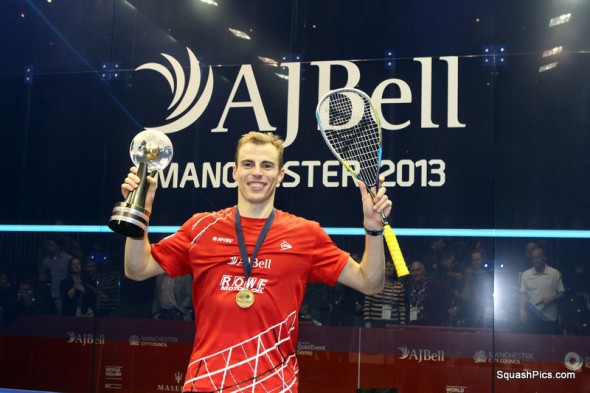