World champion Nick Matthew led a trio of Englishmen into the semi-finals of the ISS Canary Wharf Classic in London – and then described his England team-mate Daryl Selby as a “giant gnat”.

Matthew gained revenge after losing to Selby in the final of the National Championships in Manchester last month, winning 11-1, 12-10, 7-11, 11-5 in 71 minutes of punishing squash in the quarter-finals of the PSA World Tour International 50event at East Wintergarden at Canary Wharf.

“Daryl’s like a giant gnat,” said the defending champion from Sheffield. “You keep trying to swat him away but he keeps coming back. He is such a difficult player to play against and he’s beaten me in the past from 2/1 or two games down, so I knew what to expect – even though he had been on court for 97 minutes last night in the first round.

“To be honest I would rather play him fresh,” Matthew continued. “I won the first game 11-1 and I think Daryl was just getting the lactic acid out of his legs. After that it was a bit of a struggle and Daryl had me playing his type of game, working the ball up and down the side walls.

“I am very happy and relieved to be in the semi-finals,” added the top-seeded world number one. 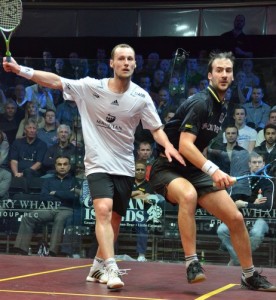 Gaultier overcame battling German Simon Rosner 11-7, 11-7, 11-6 in 52 minutes of high-quality squash. Gaultier said: “I am so happy to be back playing after my injury at the World Open. I am feeling good and moving well.

“I just want to find a French chef somewhere in London tonight so I can have a decent meal before the final.”

Earlier, James Willstrop and Peter Barker set up an all-English semi-final in the bottom half of the draw by overcomingJoey Barrington and Stewart Boswell, respectively. 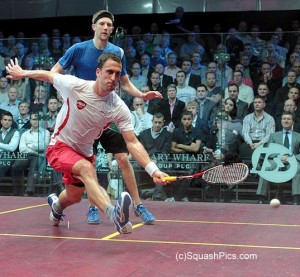 Veteran Australian Boswell certainly made No4 seed Barker work hard for his victory. The 32-year-old, who is based in Manchester with his English squash-playing wife Vicky Botwright, won the opening game and kept Barker on court for 88 minutes before the left-handed Londoner triumphed 8-11, 11-4, 11-7, 17-15.

Willstrop admitted he was guilty of some untidy play as he beat fellow countryman Barrington 13-11, 11-5, 14-12 in 44 minutes. “There are no easy games in this sport,” said the Yorkshireman. “There were several scrappy passages and I was very pleased to win through.” 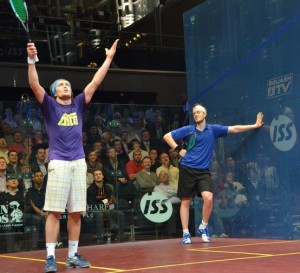 Both players were frequent users of the new TV appeal system being introduced by the PSA at Canary Wharf this year – and Willstrop is a big fan of the initiative.

He added: “This is a very forward-looking move by the PSA and it brings us in line with many other sports where it is an integral part of the presentation. It really helps to get the crowd involved in the whole process and we have the perfect venue here at Canary Wharf with the giant screen above the front wall of the glass court.”