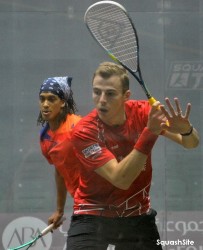 England’s Nick Matthew survived his first test as the 2013 World Champion in the second day of first round action in the Qatar Classic in the Qatari capital Doha – but later claimed the match against former England team-mate Alister Walker was “probably the toughest draw I could get”.

Third seed Matthew, ranked four in the world, had faced Walker on five previous occasions on the PSA World Tour since 2006 – originally as a fellow Englishman and more recently as the Botswana No 1.

“Ali knows me inside out and is one of the toughest players outside of the seeds to play,” said Yorkshireman Matthew after his 11-8, 11-7, 12-10 victory over the world No 15. “I knew I couldn’t kid him and he had a lot more time to think about the match than me so I’m pleased to come through. 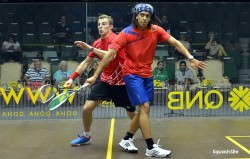 “I knew the first game was going to be very important and the psychology of that was important,” added Matthew, who last week won the PSA World Championship for the third time.

“I read a good quote this morning which was that ‘when people expect you not to be able to do it, but you still do it, that’s real mental strength’.

“I’m determined to go far this week – there’s only two tournaments left this year and I want to do well in both of them.” 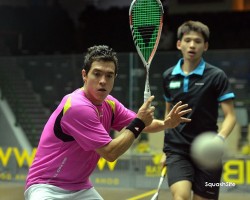 Matthew will now face Colombian Miguel Angel Rodriguez for a place in the quarter-finals of the seventh PSA World Series squash event of the year at the Khalifa International Tennis & Squash Complex. The world No 14 from Bogota despatched qualifier Max Lee 11-9, 11-5, 11-9 in his first meeting with the Hong Kong No 1. 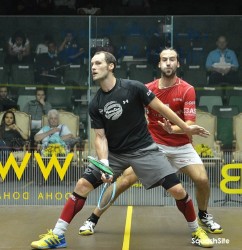 The Frenchman, ranked two in the world, will now take on Australia’s top player Cameron Pilley after the world No 16 from New South Wales defeated English qualifier Joe Lee 11-3, 11-3, 11-8. 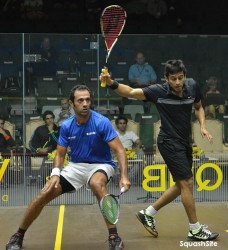 Sixth seed Amr Shabana, the Egyptian winner of the title in 2007, let slip a 2/0 lead over Saurav Ghosal when the Indian fought back to take the third game. 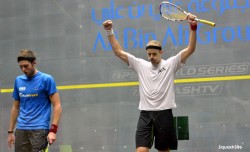 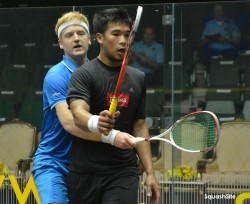 But the longest match of the day was endured by England’s Tom Richards and Malaysian Mohd Nafiizwan Adnan. World No 25 Richards squandered a 2/0 lead as qualifier Adnan forced the match into a fifth game.

Richards will line up against Borja Golan in the next round following the seventh-seeded Spaniard’s 11-7, 11-7, 11-8 win over Swiss No 1 Nicolas Mueller.