Matthew, the world No1, world and Commonwealth Games champion, beat long-time rival and fellow Englishman James Willstrop in a one-sided match 11-4, 11-6, 11-8. Shabana wasted little time in ousting Ramy Ashour, his younger compatriot and one of the future stars of the game, in a repeat of the 2009 World Open final.

The Egyptian left-hander, 31, will now attempt to win for the first time on British shores after finishing runner-up here on four occasions since first reaching the final of the British Junior U14 Open in 1993. Ashour, feeling the effects of a hamstring injury, went down 4-11, 5-11, 5-11 in 27 minutes. 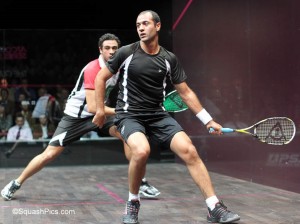 “Playing here at Queen’s is proud moment,” Shabana admitted afterwards. “I have always enjoyed watching the tennis on TV since I was a kid. Hopefully Nick and I can play another great match in front of this great crowd.”

Both Matthew and Shabana will also bid to become World Series champion for the first time, the Egyptian having also lost to Frenchman Gregory Gaultier in the 2008 final.

For Willstrop, the defeats continue to mount against his fellow Yorkshireman. The 27-year-old from Leeds last beat Matthew in the 2007 English Open final and each match he had lost since (11 of them) now has clearly played a psychological advantage as 30-year-old Matthew’s dominance has increased on the world stage. 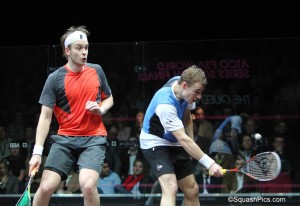 Not that Willstrop has gone down without a fight. He lost out in a brutal British Open final in 2009, when Willstrop held match balls, and in last year’s Canary Wharf Classic semi-finals, which saw the younger Yorkshireman’s bid end with severe cramp after one of the finest contests in recent years.

In the World Series semi-final, Matthew stretched his opponent early, creating a number of winners from Willstrop’s loose angles in the opening game.

In the second he raced to a 6-1 lead before Willstrop produced his best squash of the match, using his backhand volley drops to clinical effect to close the gap to 7-5.

At 9-6 down, Matthew sent a forehand winner to the back wall as Willstrop failed to find a way past his opponent. He was denied a let, claiming he clipped Matthew’s shoe, and his frustration played into Matthew’s hands as he closed out the second 11-6. 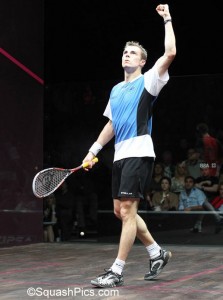 Sheffield-based Matthew refused to play short in the third as he bid to dig Willstrop into the ground. However the 6′ 4″ Pontefract player – wearing a rare set of cycling shorts, a sign that he was struggling with injury – kept in the match as he crawled two points ahead at 7-5 before Matthew, yet again, surged towards the winning post.

“I tried to keep the pressure on all the way through,” said Matthew. “You get that bit between your teeth when you see the winning line and you lose a little bit of composure. It’s important to will yourself on with those big points, like the Egyptians do so well, but I think I achieved that tonight.”

A clearly despondent Willstrop said: “I’m really sad I couldn’t produce it today. I was really flat. For two years I have been second best to him and all I can do is keep battling away.”

He was also hard on himself when asked for his highlight of the week. “Beating Ramy, even though he was on one leg,” Willstrop added.