World number one Nick Matthew was fully tested by England team-mate Peter Barker in the quarter-finals of the ROWE British Grand Prix before finally emerging triumphant after 78 minutes to earn his anticipated place in the last four of the PSA World Series squash event in its second year at the National Squash Centre in Manchester. 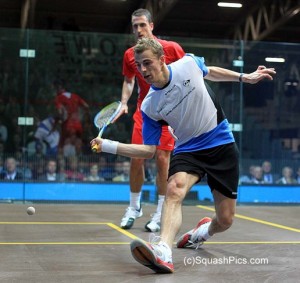 It was favourite Matthew, the double Commonwealth Games gold medallist from Sheffield, who provided the most drama in the final match of day – coasting to victory in the first game and leading up to 8-6 in the second.

It was then that left-hander Barker, the world No7, began to assert his authority on the match – picking up four points in a row to reach game-ball.

But Matthew fought back – the advantage seesawing between the pair as Barker battled to save three game-balls against him before the Yorkshireman finally clinched the game 15-13.

Barker, however, was not to be outdone, and led almost all the way through the third before reducing the deficit.

A more-determined-than-ever Matthew returned for the fourth to build up a 9-2 lead. Barker continued to try and deny his close friend an easy conclusion, but after two match-balls the favourite clinched his 11-5, 15-13, 8-11, 11-7 victory.

“He’s one of my best friends off-court, so it’s always difficult to play him,” said Matthew after his marathon win.

“It hinged on crucial points – and we had one or two of those in the second game,” added the 31-year-old. “Then he came back in the third. But I knew Peter was coming in fresh.

“I was really good in the first game and a half and made very few errors.” 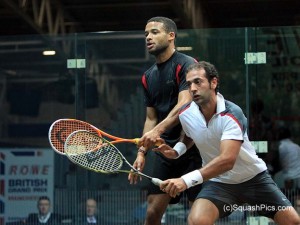 Earlier, Cairo star Amr Shabana ended Londoner Adrian Grant‘s impressive run in the World Series event. Grant, returning to form after a hip injury, produced a blistering display in the previous round to upset England No2 James Willstrop, the runner-up in 2010.

But the 30-year-old former world No9 couldn’t match the inspired play of the Egyptian who boasts 26 PSA World Tour titles including four World Open crowns.

Shabana, too, is making a determined bid to return to the top of the world rankings, a position he held for 33 months until the end of 2008. The charismatic left-hander led for most of the match, recording an 11-5, 11-6, 12-10 victory after 46 minutes – a win which takes the world No5 into his seventh successive PSA World Series semi-final.

When asked by compere Sue Wright, the former England international, to comment on the fact that the first game seemed tough, Shabana responded: “The whole match was tough. Adrian clearly had a game-plan and stuck to it. I was happy to get away in three.”

When reminded by Wright that, despite his major title successes all over the globe, he had yet to win a tournament in England, Shabana said: “I did win a British Junior Open plate title a few years ago – but it is time for another one!”

The Prince of Cairo had much praise for his opponent: “Since his injury, he’s much faster and much stronger. I had to play my best squash to beat him.”

Shabana admitted that he thought his career was ending after problem with both knees in 2009 and a slipped disc the year after. “I thought about what I could do next, but hard work and determination got me back to where I am now. 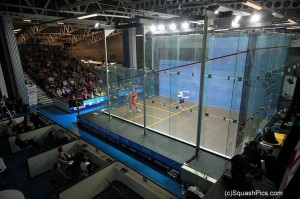