World squash champion Nick Matthew reached the quarter-finals of the Allam British Open with a ruthless performance against England team-mate Tom Richards – having lent him a shoelace in the middle of the second game! 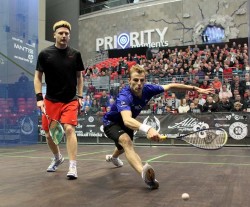 Richards stopped play as his lace broke and, without a spare, he could only play on when Matthew went to his own bag to find a spare.
When the players returned to court Richards won the second game but Matthew regained control in ruthless, disciplined fashion to win the third and fourth as Richards’ challenge faded.

Matthew said: “I wish I hadn’t lent him that shoelace. It was a ridiculous decision to give Tom a let for a broken shoelace. I’ve never heard that one before.

“But, that apart, he is a top-16 player who has just made his England debut and I had to be on my guard the whole way through.

“When it went to one-all in games I had to respond in the third. I was pleased to win that and at the start of the fourth there were some stoppages and it took a while to get back into my rhythm.

“But overall I am very pleased with the win and am feeling good.” 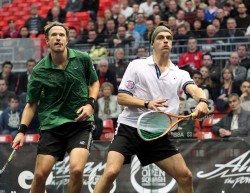 In the quarter-finals  he meets Dutch No.1 Laurens Jan Anjema, who swept past South African Steve Coppinger 3-1.

Matthew added: “LJ is like Tom, another player knocking on the door and hungry for a major scalp. No more rest days now. I’m glad about that. We are at the business end of the tournament and it would be great to see the O2 Arena full up with squash fans making lots of noise at this amazing venue.”

No.2 seed Gregory Gaultier ended the run of English qualifier Jonathan Kemp in just 33 minutes and now faces a tough challenge from No.6 seed Peter Barker. The Essex-based left-hander dropped the first game to Indian No.1 Saurav Ghosal but recovered to control the rest of the match. 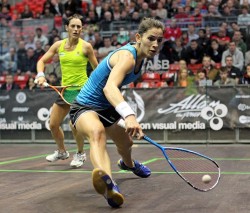 Grinham’s sister Natalie, who represents Holland, crashed out to England’s Laura Massaro. The No.3 seed from Preston won tense tiebreaks in the first two games before taking control in the third. She now meets French No.10 seed Camille Serme, who beat Jaclyn Hawkes of New Zealand in just 23 minutes.