England’s world champion Nick Matthew is one match away from his 50th PSA World Tour final after beating former compatriot Alister Walker in the quarter-finals of the Springfield Solutions British Grand Prix, the PSA International 70 squash event at the National Squash Centre in Manchester.

But the world No2 from Sheffield, who had never previously lost to Walker, was initially outclassed by the world No13 now representing Botswana, the country of his birth. The US-based 30-year-old played superbly to take the first game and build up an 8-5 lead in the second. 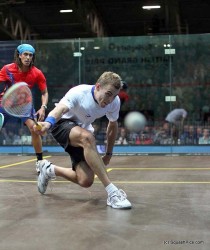 But like other seeded players earlier in the day, second seed Matthew weathered the storm – coming back to draw level before dominating the next two games to win 9-11, 11-8, 11-4, 11-3 in 58 minutes.

“Ali sure makes you work hard, but it’s funny how quickly things turn round,” explained the 2011 runner-up later. “I was facing going 2/0 down and maybe going home, and the next thing I know I’m 7-1 up in the third.

“He was immaculate for the first two games and the best compliment I can give him is that I had to change my game. James (Willstrop) spoke earlier about the game of chess, that’s exactly how it felt for me tonight.” 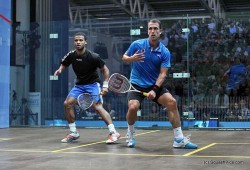 Matthew now faces England team-mate Peter Barker for a place in the 50th Tour final of his career – after reaching his first in Barcelona in September 1998.

“I had to be solid and focused, because I wasn’t either of those things yesterday,” said the 28-year-old world No7. “I’m not sure Adrian was at the top of his form or even 100% tonight, but he is still dangerous and can hit shots from anywhere, so I really had to stay focused.” 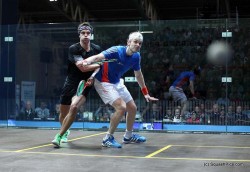 The other semi-final will feature favourite James Willstrop, the world number one from England, and career-long French rival Gregory Gaultier.

“I had to cover a lot of ground today, LJ is very strong physically,” said the 29-year-old from Leeds. “It’s a good result for me to beat him 3/1. I’m happy with that, he really got me sharp for tomorrow.”

Third seed Gaultier had to overcome a strong challenge from unseeded Simon Rosner. The top-ranked German stayed with Gaultier every inch of the way in the first two games, failing to capitalise on a game ball in the first, then taking the second on his second game ball. 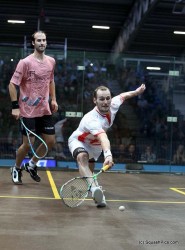 “After winning the first, I was up 4-0 and just relaxed too much,” admitted Gaultier. “It’s only in the third and fourth I started to vary my shots to the four corners, I was able to speed up the pace. But he didn’t make it simple for me, that’s for sure!”

Rosner, the six-time German champion added: “In the third, my game just wasn’t there, but I got it back for the fourth. I’m proud I’m able to compete with Greg and make it a hard fight for him.

“He is one of the players I’ve been looking up to since I was 12, and I hope that I can sneak a win one day.” 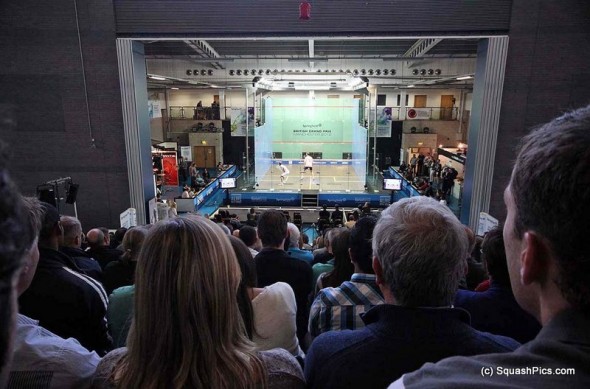