With honours level at one victory each, Matthew recovered from 8-6 down to win the first game and then powered through the second, playing superb squash to force a succession of errors from his 23-year-old opponent.

Matthew continued to dominate in the third game and when he advanced to 8-6 he was within touching distance of the trophy.

However, Ashour suddenly tightened up his game and reeled off five points in a row to fend off defeat.

Matthew continued to play tight, stylish and intelligent squash to generate a 6-4 lead in the fourth game – but once again Ashour responded with his own unique brand of attacking play.

The winners began to flow as the capacity crowd at the Westwood Club roared their encouragement. Ashour collected five points in a row to lead 9-6 and then, after Matthew had crept back to 8-9, he closed out the game to take the match to a fifth game decider.

But he failed to maintain the momentum as Matthew marched imperiously towards his second Richmond title. Ashour won the first point of the game but Matthew produced a devastating brand of controlled, almost error-free, squash to lead 5-2 and then 8-3.

Ashour had the crowd on their feet as he won three vital points to reach 6-8 but Matthew closed out the match to gain revenge for his defeat in January’s final of the JP Morgan Tournament of Champions in New York, the first PSA World Series event of the year.

A delighted Matthew said: “Ramy and I are building quite a rivalry but that match in New York was our first meeting since August last year, which shows how many good players there are at the top of the game who stop us from meeting in every final. 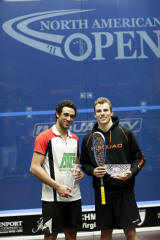 “It was a great match and as Ramy is a lot younger than me I hope I can keep the rivalry going for a few more years.

“I know the crowd were cheering for him to come back when I was 2/0 up but I won’t hold it against them. This tournament gets bigger and better every year and we have all enjoyed the superb new venue at the Westwood Club,” added the Yorkshireman, whose 40th PSA Tour final appearance netted his 19th title.

“The crowds have been great every day and the game is gaining a massive foothold in the United States.

“We had live coverage on ESPN for the semi-finals and finals and we hope that squash fans over here will continue to follow the Tour on our own PSA SquashTV streaming channel.”

For a third consecutive evening, the crowd finished the evening’s play with a standing ovation. This time Ashour, who reached the final with two spectacular victories against Gregory Gaultier and James Willstrop, failed to deliver.

“Nick is a great champion and today he showed why he is number one in the world,” said the world No2 from Cairo. “It was a fantastic match and I am sure we will have many more of them as we go round the world playing in so many great tournaments like this one.”

Ashour dedicated his victory in New York to the Egyptian nation – and did the same in Richmond as he collected the runner’s-up trophy.

World champion Nick Matthew meets world number two Ramy Ashour in the final of the $115,000 North American Open for a third year running after the top two seeds stormed through their semi-finals at the Westwood Club/ in Richmond, Virginia. 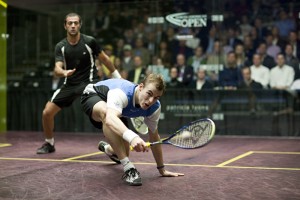 Matthew played tight, controlled squash to win the opening game but Shabana, the four-time world champion from Cairo, responded in spectacular style to take the second with a succession of dazzling winners.

Matthew, who will be celebrating his 40th appearance in a PSA World Tour final, said: “Amr was unplayable in that second game and you have to try to restrict his shot-making opportunities or he will destroy you.

“It feels great to be in another Richmond final. I’m feeling good and looking forward to it.” 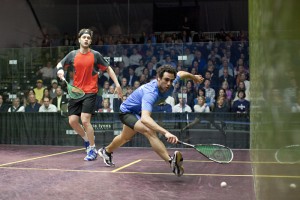 Ashour and Willstrop received a standing ovation from the enthusiastic Richmond crowd after an incredible display of shot-making.

Willstrop played some superb squash in patches but No2 seed Ashour was in extravagant, outrageous form with sensational winners from all over the court.

Ashour edged the first game but Willstrop wasted game-ball in the second, allowing Ashour to hit back and take the game on a tie-break.

Willstrop tightened up in the third game and played immaculate squash to win 11-5. However, Ashour got off to a flying start in the fourth and although Willstrop clawed his way back to 5-7 with some fine shots the Egyptian genius closed out the match 11-8, 12-10, 5-11, 11-6 in spectacular style. 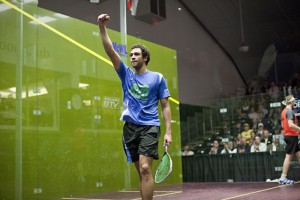 Two weeks ago Ashour joined the demonstrations on the streets of Cairo – but he clearly was unperturbed by any disruption to his training schedule. He said: “That inspired me so much I didn’t worry about any gap in training.

“I love playing here in Richmond for such a knowledgeable crowd. They inspire me, too.

“James is always a difficult opponent. He is so skilful and we always have great matches, so I’m pleased to win and pleased that the crowd enjoyed it as much as I did.”

Ashour’s meeting with Matthew is a repeat of their showdown in the final of the first World Series event of the year, the JP Morgan Tournament of Champions in New York, which the Egyptian won.

Ashour won the NAO title two years ago but was forced to concede in last year’s final because of injury.

The final will mark the players’ 13th Tour meeting since April 2007 – and their seventh in the USA. Ashour heads the career head-to-head tally 7-5, but the pair are level at three-all in US clashes.

As a treat for viewers in the USA, the North American Open goes out live on ESPN3.com this weekend.