Both players were forced into some gut-wrenching retrievals to keep in play some spectacular attacking shots from each other. 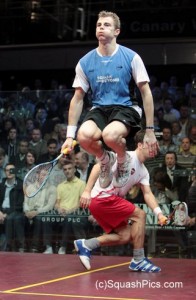 He looked focused and disciplined as he constructed tight rallies that presented serious problems for the top seed.

Left-hander Barker took the opening game 11-5 and his home supporters in the sell-out crowd at the East Wintergardenwere hoping for another shock victory.

However, Matthew responded in devastating fashion, demonstrating exactly why he has been the dominant player in world squash for the past year.

The Yorkshireman powered ahead in the second game and, as the challenge from Barker faded, he took complete control to clinch victory in 58 minutes of entertaining squash.

Barker, despite doing most of the chasing, refused to give up and launched himself into some massive diagonal runs as Matthew powered winners into the four corners of the court. 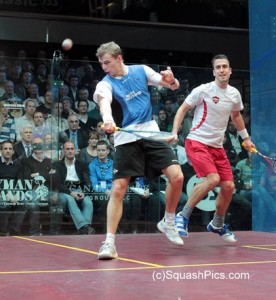 Matthew said: “Peter started very well and it took me a while to get into the match and start moving properly. But I was pleased with the way I played and I hope the crowd enjoyed the match, despite me beating the home favourite.

“This is one of the best tournaments in the world and all of the players love coming to Canary Wharf. Next year is a big year for sport in London and I hope it’s not too late for the IOC to change their mind about having squash in the Olympics.”

Matthew was impressed by the success of the Video Replay trial organised by the PSA that enabled players to direct an appeal at a TV judge, who was able to study replays of any controversial incident before making a decision that flashed up on the huge screen above the front wall of the glass court. 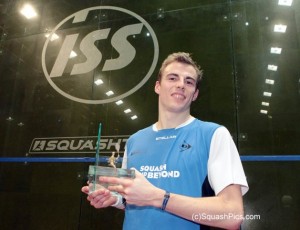 “I think it worked well,” said the champion, after picking up the 20th PSA Tour title of his career. “There were one or two tweaks by the end of the week and allowing one appeal per game, plus one in the tiebreak, was the right number.

“It cut out the arguments between players and referees and helped the crowd to get involved in the whole process.”

Runner-up Barker said: “I started well but Nick showed what a great player he is by the way he came back. Overall I have to be happy with the whole week and I need to start reaching more finals like this.”