England’s Nick Matthew clinched his fifth successive PSA World Tour squash title and showed just why he is ranked number one in the world when he downed Egypt’s Ramy Ashour in straight games in today’s (Sunday) final of the $142,500 CSR Viridian Australian Open, the fourth PSA Super Series championship of the year, in Canberra.

The Yorkshireman stuck with Ashour through the Egyptian’s periods of brilliance, then slowly squeezed the challenge out of the world number two as he eased to a 16-14, 11-7, 12-10 victory to become the first Englishman to win the Australian title since Gawain Briars in 1978. 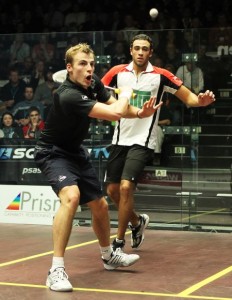 “You have to go through the patches when he’s just too good for you,” Matthew conceded. “He’s brilliant – you just have to get through those moments.”

Matthew and Ashour went point for point in the first game until 9-9 when Ashour brought up the first of five game balls.

But every time he took the advantage, usually through an outrageous nick or unbelievable drop, Matthew somehow managed to fight his way back until 14-14 when an Ashour error gave Matthew game ball.

The 30-year-old from Sheffield needed no second invitation and took an epic first game 16-14, then came out firing at the start of the second to seize control of the final.

Matthew wrapped up the second game and fought back from 10-7 down in the third. Although the third was close Matthew always looked the most likely, particularly when Ashour began struggling with a foot injury late in the game. 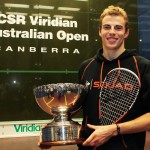 “I think at the time we could both feel that while (saving five game balls) may not have been a match winning scenario, obviously the first game is so important and then when I got a good start at the second, in hindsight that was a massively crucial part of the game,” Matthew said.

“The temptation when he’s hit a few good winners is to panic, but you have to really stay patient, because he hits shots no one else can play and he plays at pace.

“You sometimes have to hold your hands up and say ‘alright, what can I do better, what can I do to impose my game on him’. I think I managed to do that, but in three games I never got an easy point.”

Matthew said he still had plenty of improvement left: “I’m only just 30 and I still feel that although I’ve not got the attacking game of Ramy, I’m always working and becoming better and better.

“If you stand still other people catch up and overtake you, so you’ve always got to keep working to improve.”

The win marks Matthew’s 23rd undefeated Tour match in a row, and his fifth successive title, including the Swedish Openand North American Open in February, the Canary Wharf Classic in March and the Sky Open in Egypt in May.

Madeline Perry became the first Irishwoman to win the Australian Open when she beat England’s Alison Waters in today’s (Sunday) thrilling five-game final of the $56,000 WISPA World Tour squash event – the sixth WISPA Goldchampionship of the year – in Canberra. 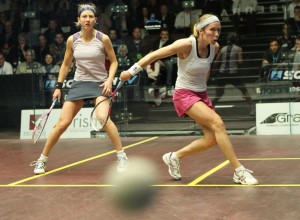 The 75-minute final was a wonderful advertisement for women’s squash, with the match swinging first one way then the other until fourth-seeded Perry closed it out on a controversial no-let call, which caused Waters to throw her racket in disgust and the new champion to throw hers in elation.

The title also crowned a superb comeback for the 11-time Irish national champion who was hospitalised with severe head injuries after she was mugged in Italy three years ago, with doctors unsure whether she would ever play squash again.

Perry was dynamic from the start and caught Waters on the back foot with her court movement and precision.

But Londoner Waters, the third seed, stormed back to dominate the next two and level the match.

The deciding game went point for point – Waters had match balls at 10-9 and 11-10, which Perry saved.

Perry then got to 12-11 and closed out the match when she put in a drop shot and the referees ruled that Waters would not have reached the ball.

“I thought it was a let – they’d been giving those as lets the whole game, but what can you do?” Waters said. 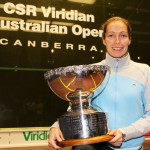 Perry said was thrilled to have finally broken through for a major win. “Getting to the final was a big achievement, but winning it was huge for me,” said the career-high world No6, whose ranking is now certain to rise.

“I won the first two but I wasn’t feeling amazing, I felt a lot of tension in my body and then she really upped the pace in the third and fourth and I couldn’t respond.

“The fifth was pretty even all the way through – you could see both of us were getting a bit tired and not doing that much.

“But I stuck in there and took my match ball when it came.”

Perry said she was probably playing the best squash of her career and her win over Jenny Duncalf, the world No2 from England, in the semi-finals was as good as she had ever played.

The win marks Perry’s seventh WISPA Tour title – but her first on foreign soil for more than five years.

A disappointed Waters said she had paid the price for her slow start. “I was feeling a bit off physically and she came out firing. I only started to get into it in the third and mixed it up a bit.

“The fifth was a bit of a battle really – I had my match balls but couldn’t take them,” explained the dejected world number four.