The 31-year-old from Sheffield clinched victory in straight games but the quality of the squash and the length of the rallies in the climax of the PSA World Tour International 50 event at East Wintergarden in Canary Wharf, London, meant that the brutally-fought encounter lasted 78 minutes. 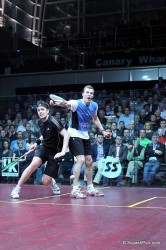 The result provided a 20th consecutive victory for Matthew against fellow Yorkshireman Willstrop in all competitions. It was his third victory this year, following earlier triumphs in the finals of the Tournament of Champions in New York and theBritish National Championship in Manchester.

The opening game was a tense affair with prolonged rallies but Matthew produced a strong finish to hit back from 6-5 down to win 11-7.

He threatened to run away with the second as he raced into a 5-1 lead before Willstrop clawed back the deficit with three consecutive points.

Each time Matthew pulled ahead, Willstrop fought back to excite the capacity crowd at the stunning East Wintergarden venue, but again the gritty world number three showed his determination to clinch the 31-minute game 11-8. 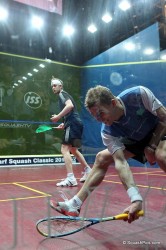 Willstrop, the world number one, maintained a narrow lead throughout the majority of the third game, but at 9-9 he hit the ball out and on match ball he struck the ball back to himself in mid-court to concede the match.

Willstrop had conceded seven penalty strokes during the match, and Matthew said after receiving his trophy: “James has played well and been the best player in the world over the past five or six months so any win over him at the moment has to be earned the hard way.

“We both spent a lot of time on court before reaching the final and maybe that was the reason some of the squash was a bit scrappy at times. But the intensity was always there throughout the match.

“That would have made a great Olympic final. It’s galling to pass the Olympic Stadium every day heading to and from the venue knowing that we are not taking part. 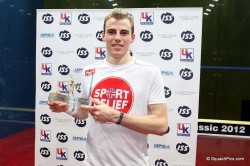 “I’m 31 now and know the end of my career is not too far away. But the hunger is still there and especially for matches like this in such a fantastic venue and in front of crowds like this.

“Canary Wharf is now the home of squash in London the way Wembley used to be in the days of Jahangir Khan.”

Willstrop added: “I have to take something positive out of that match. I am happy with my game and am enjoying being at number one. It’s been an amazing few months with Nick and I swapping over at number one and it’s nice to hear that I can open another bottle of champagne at the end of the month knowing that I will still be number one in April.

“Nick was too good for me today and he has the edge at the moment.” 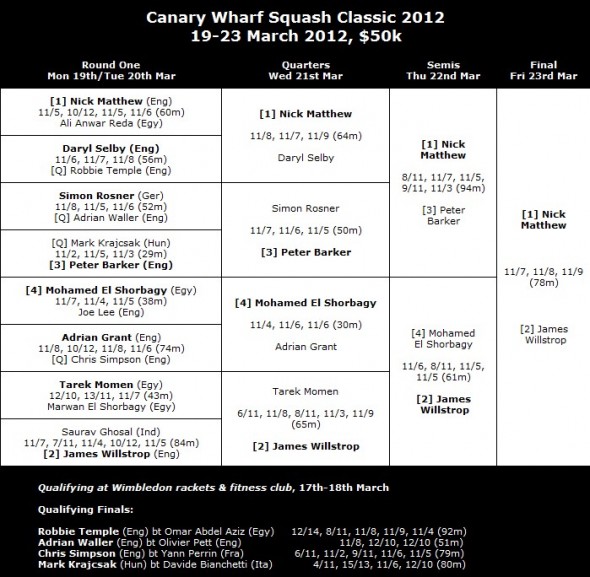