British squash champion Daryl Selby has another chance to topple world No1 Nick Matthew when they meet in the quarter-finals of the ISS Canary Wharf Classic on Wednesday in London.

Selby overcame his England team-mate in the final of the National Championships in Manchester last month – but the world No11 from Essex nearly blew his chance of joining Matthew in the last eight of the PSA World Tour International 50event at East Wintergarden at Canary Wharf. 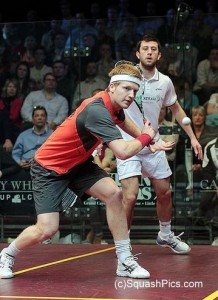 His first match ball came at 10-7 in the fourth but Richards fought back to win the tiebreak 16-14.

Richards looked exhausted at the start of the final game and it looked all over as Selby led 10-3. But the Surrey underdog dug deep and won six points in a row as the crowd roared their encouragement.

Richards, ranked 29 in the world, produced some stunning winners before Selby finally put the winning ball beyond his reach.

Selby, who is also the national racketball champion, said: “That was not exactly the ideal way to prepare to face the world champion the next day. That was total squash carnage out there.

“Tom is a very dangerous player and he showed in the recent North American Open that he is capable of hurting the top guys when he came very close to beating Ramy Ashour. The way he came back at the end was unbelievable.”

In his first Tour encounter with former world No10 Golan, the 30-year-old world No1 from Sheffield won 11-8, 11-2, 11-8 – producing an outstanding spell of form in the second game when he looked invincible. 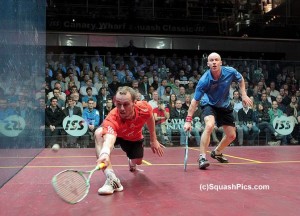 Gregory Gaultier, the third-seeded Frenchman who was runner-up to Matthew last year, overpowered Finnish No1 Olli Tuominen in straight games to clinch a quarter-final clash with German No1 Simon Rosner, who beat England’s Chris Ryder in four games.

England have five representatives in the quarter-finals. No2 seed James Willstrop from Leeds, a three-time champion at Canary Wharf, meets compatriot Joey Barrington, the world No31 from Somerset. No4 seed Peter Barker from London meets Australia’s Stewart Boswell.