An 85-minute all-English climax to the 2012 JP Morgan Tournament of Champions in New York saw Nick Matthewnot only win the prestigious PSA World Series squash title at Grand Central Terminal for the first time, but also wrest the world number one ranking from his opponent James Willstrop. 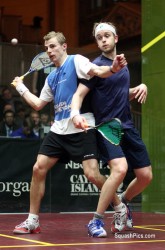 “This win is right alongside the Worlds and Commonwealth Games gold medals as my best victories,” said the jubilant 31-year-old after his fourth Tournament of Champions final and playing his first tournament after two months off the tour to recover from an injury.

The eagerly-awaited clash before a jam packed crowd glued to their seats in Vanderbilt Hall at Grand Central Terminal was the 28th Tour meeting between the two Yorkshiremen – with Matthew, the world No1 throughout 2011, boasting a 19-8 advantage and an unbroken winning streak of 12 matches since December 2007.

But it was their first confrontation since Willstrop had run off three PSA World Series titles in a row and replaced his rival at the top of the PSA world rankings at the beginning of this year.

The match was marked by physical play, wall-hugging rallies and several mini shifts in momentum. “I think one of the differences tonight was that I did a better job of capitalising on the momentum when it shifted my way,” said Matthew. 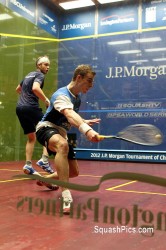 That was certainly true in the third and fourth games – but in the first it was 28-year-old Willstrop who took advantage when he surged ahead 10-7 after being down 5-7. Willstrop rode the momentum from his 11-8 first game win to take an early 5-2 lead in the second.

Matthew fought back to move 6-5 ahead. Later up 9-7, Willstrop moved Matthew to the four corners of the court and looked to be heading to game-ball when he forced a loose shot from his opponent at the front of the court.

Instead, he hit the tin. “The end of that second game was really the difference in the match,” explained Willstrop later. “I needed to put it away.” Instead of being ahead 2/0, the 2010 ToC title-holder was tied at one-all with an opponent who was physically fresher as a result of not having played any tournaments for two months. 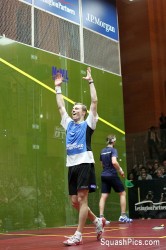 The fourth game was marked by several swings in momentum. Matthew jumped out to an early 5-1 lead, but Willstrop clambered back to 5-5.

After Matthew took the next point on a stroke decision, Willstrop stayed close but couldn’t snatch back the lead. A few times during the game, especially as play got physical, Matthew got emotional. “I knew I needed to be aggressive,” said Sheffield-born-and-raised Matthew. 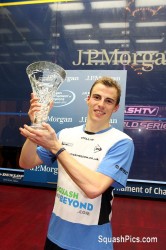 “But sometimes it was also the pent up emotion of the last couple of months. It was hard to lose the No1 ranking because of inactivity, and sometimes I could be a real pain to be around.”

At match ball, 10-7, Matthew passed Willstrop on the forehand side with a shot that was too crisp and too deep to retrieve. After four trips to the final, Matthew was taking home the ToC Trophy and reclaiming the world No1 ranking in February.

Willstrop later acknowledged that he “needs to work harder” to figure out a way to beat his long-time rival.