Laura Massaro and Nick Matthew will be hoping to take home advantage when they compete for the ATCO PSA World Series Finals titles at Queen’s Club on Sunday.

Both David and Shabana are defending champions. 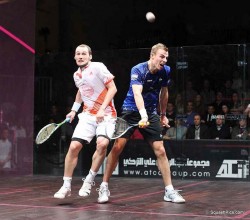 “It came down to one or two points and it was a viscous pace,” said Matthew.

“The crowd was great and Greg had his fair share of support as well. In the end I think the crowd just wanted it to be as close as possible. I’m looking forward to playing Amr. He took me to the cleaners when we played earlier in the week. Hopefully I can get some revenge.” 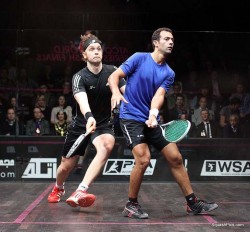 Shabana proved too strong for England’s James Willstrop in their semi-final, despite a battling performance from the Yorkshireman in front of a home crowd.

“It’s very intimidating playing in front of a crowd like that and I definitely think James rallied the more they supported him,” said Shabana. “Nick is one of the fittest guys out there and he covers the court very well. I’ll have to play well against him.” 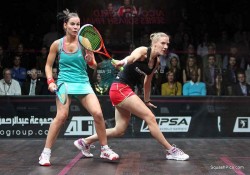 “I felt like it was a really competitive match against Jenny. There are definitely a few things I can improve on but Jenny played really well. She’s improved a lot and she’s obviously started the year really well,” said Massaro.

Massaro has already notched up one win over David this week, having beaten her in their round robin pool match on Thursday. 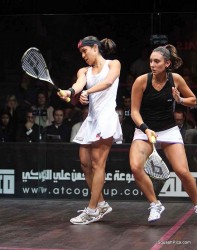 “To be honest it’s a nice little confidence boost but she’s definitely a player who raises her game and she hates to lose so I’d expect things to be a lot tougher against her in the final,” said the Englishwoman.

David said she expected another strong challenge from Massaro, whom she beat in the Cayman World Open final last month.

“In our pool match, Laura was just playing better on the day and she’s a tough player but I just know that as the week develops you feel better and better.

“I’m just looking forward to playing the final against her and putting it all out there. Hopefully I can save the best for last.”