As is often the case, El Weleily took a few minutes to get her eye in while Massaro quickly extended a four-point lead.  Once the Egyptian’s shots began working however, she stormed through a quick first game, closing it out with Massaro able to register just one more point. 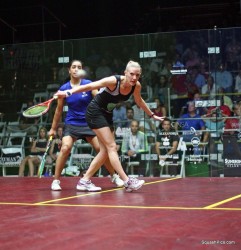 The Englishwoman fought her way back into the match, establishing runs of points and claimed the second game to level the match.  She never quite got a foothold in the third game, staying with her opponent but always a point or two behind, until the world No.3 saved four game-balls to force the tiebreak.  El Weleily would close out the game after two Massaro volleys clipped the tin.

A dominant fourth-game went in Massaro’s favour, with the Egyptian unable to register any real threat, setting up a nail-biting fifth game finale.  Massaro reached match-ball first, and was disappointed when a let decision was given instead of a stroke against her opponent.  El Weleily stayed strong to force the tiebreak, but both players were showing signs of nerves as the errors continued to creep in at the wrong time, before two mistakes from the 23-year-old from Alexandria sent Massaro through to her first World Open final. 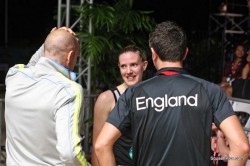 “We’ve been taking turns at winning and swapping in the rankings all year, so it’s fitting that there was just a couple of points between us in the whole match,” an emotional Massaro told SquashSite.

“You always know with Raneem there are going to be patches where she hits winners, you just have to hang in and come through them.  It feels great to reach the World Open final, I’m so happy!”

“Now it’s all about getting the right preparation for tomorrow. I haven’t been to swim with the Dolphins yet, it looks like [husband] Danny will have to go on his own now!” 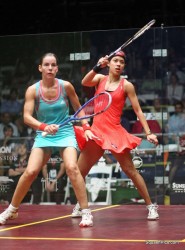 Massaro will be joined by world No.1 Nicol David in the World Open final, with the Malaysian on the prowl for her seventh World Open title in eight years.  The top seed defeated Jenny Duncalf in her semi-final contest, in a repeat of last year’s World Open final in Rotterdam.

Duncalf, keen to set the record straight after a humbling 0-11 loss in the third game of last year’s final, made a steady start to last night’s match, feeling her way into the contest and registering some good points.

The Malaysian was made to work throughout the opening exchanges, but maintained a small lead as the game progressed and took three points in a row to claim the first game.

David increased the pace and saw the Englishwoman begin to struggle as the top seed extended a strong lead in the second before closing it out. 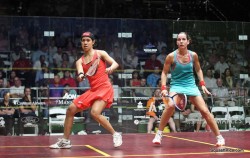 A similar pattern occurred in the third game, with the scurrying retrieval and powerful hitting simply too good for the former world No.2, as David progressed to her seventh World Open final in straight games.

“Jenny was playing some great shots at the start, I just couldn’t tell where the ball was going next and I wasn’t able to play my own game,” said Nicol.

“I really had to up my game to stay in it, and thankfully I got it all together as the match wore on.

“It’s great to be in another final here, especially the World Open!  Laura and I both know we have to step up our games for tomorrow, so it should be a great battle.” 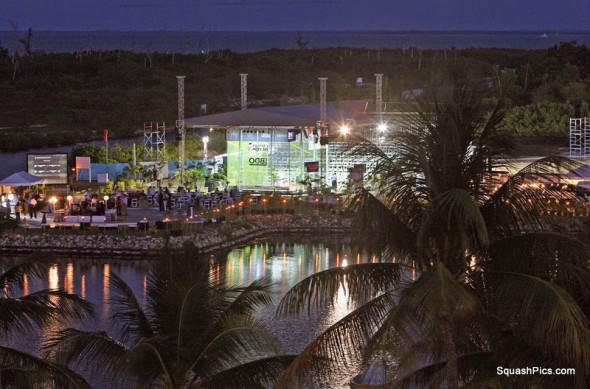