It was already the biggest final of Laura Massaro‘s career – and it led to her biggest win of all-time when the eight-seeded Englishwoman inflicted the first defeat of world number one Nicol David for 14 months in the final of the Women’s Cleveland WISPA Classic in the USA.

In her giant-killing run to the final of the WISPA World Tour Gold squash event at Cleveland Racquet Club inCleveland, Ohio, Massaro despatched world No2 Jenny Duncalf in straight games in the first win over her England team-mate in almost five years – then ousted Madeline Perry, the No4 seed from Ireland.

And the 27-year-old world No10 from Preston in Lancashire walked onto the court to face David 9-0 down in her career head-to-head record against the Malaysian.

Furthermore, earlier on the same day it was confirmed that Nicol David was celebrating her 58th month at the top of the world rankings – thus equalling Australian Michelle Martin‘s achievement as the player with the second-longest world number one reign of all-time. 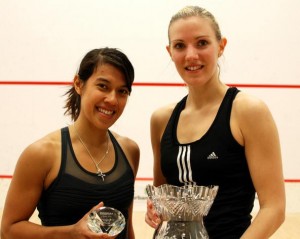 But Massaro was on a roll – and the England number three jumped out of the blocks to a 7-2 lead in the first game.

“She showed no respect whatsoever to the world champion, as she patiently rallied up and down the wall before catching David with a deceptive boast or a winning volley kill,” said Cleveland Racquet Club Squash Director Nathan Dugan. “David, who is known for her ability to get herself back into a game from a losing position, then reeled off six straight points and it appeared the momentum had shifted largely in the Malaysian’s favour.

“As David once again levelled at nine-all, the atmosphere in the crowd was tense, realising that this was maybe a game Massaro had to win to make the night competitive. When Massaro held game ball, so did the breaths of the spectators as Massaro hit a winning forehand volley drop to take the first game and an unexpected lead in the match.”

Massaro went on to take the second game before David took the third, albeit from a position of nine-all in the game.

“As David served at the start of the fourth game, many thought we would now see what we knew David was capable of delivering,” Dugan continued. “David looked to pick up the pace and her trademark rushing between points as she took a 3-1 lead – but was later tempted into a few unforced errors, giving her opponent a 7-5 lead.”

“I’m really pleased with the win,” said the jubilant Massaro. “To beat the world number one, two and six in the same tournament was a dream before tonight.

“I can’t believe I have achieved one of my dreams.

“I thought I played really well and am looking forward to getting home to celebrate with my family,” concluded Massaro.

Dugan added: “It would be interesting to know the statistics of when in fact a player last beat the world number one and two to win a title in the same event – but tonight’s is an achievement that I am sure will be unmatched for quite some time.”