France’s Gregoire Marche became the only qualifier to make the last 16 of the J.P. Morgan Tournament of Champions when he upset experienced Finn Olli Tuominen on the second day of first round action in the first PSA World Series squash event of the year at Grand Central Terminal in New York.

It was an authoritative triumph for the 22-year-old from Aix-en-Provence who, when he qualified against expectations, admitted that it was a ‘dream come true’ to make his debut on the fabled all-glass court in Vanderbilt Hall. 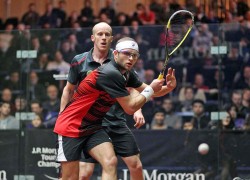 Unfazed by his first appearance on the court, world No36 Marche ripped through Tuominen with an 11-1 first game win. A persistent retriever, the Frenchman stepped up to a 7-3 lead in the second. But the 32-year-old Finn, known for his tenacity and fitness, closed the gap at eight-all and then nine-all.

Marche held fast, though, and won the second at 11-9. Tuominen, ranked 12 places higher, made a good run in the third, after being tied at five-all, and kept his own ToC hopes alive by winning the game 11-5. The young and increasingly confident Frenchman pushed back to win the fourth game 11-5.

“There was a little bit of stress,” Marche said after the match. “But I knew I could win this match. I worked hard at the end of the year to be ready for this.”

While his accuracy during the match was good, Marche’s post-match racket skills may need some tuning up. The exuberant winner tossed his racket in the air on winning his match-ball – and it landed on Tuominen’s head! 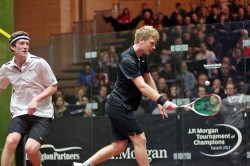 Marche’s second round opponent will be Egypt’s Mohamed El Shorbagy, a surprise finalist at the PSA World Championship in December. The fast-rising 21-year-old eliminated Dutchman Laurens Jan Anjema in straight games, 11-4, 11-5, 11-9. “I think I played well today,” said El Shorbagy, the sixth seed. “If you can win 3/0 in the early rounds, it is a bonus.”

Englishman Tom Richards played before the most vocal crowd in Grand Central when he took on the lone American in the draw, wild card Todd Harrity. The Princeton University senior went toe-to-toe with Richards in the first game, supported by his very vocal Princeton team-mates. 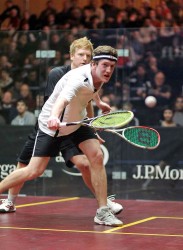 However, the young American was not able to capitalise on the game ball he had at 10-9, and Richards clinched the game 12-10. Moving the ball from corner to corner, world No13 Richards increased the pressure on Harrity, winning the next two games 11-3, 11-6, in convincing fashion.

“I was impressed with how Todd came out to play,” said the 26-year-old from Surrey. “He really forced the issue, attacking the ball and volleying.” As for his own rise in the rankings in the past year, from 20 to 13, Richards credited a better understanding of the game and better shot selection for his improvement.

Richards will face 2009 champion Gregory Gaultier in the second round. The 30-year-old third-seeded Frenchman played the briefest first round match, dismissing Egypt’s Hisham Mohd Ashour in three games in 25 minutes. 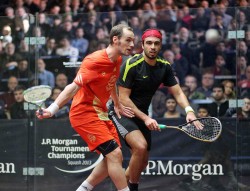 Seventh seed Karim Darwish, also from Egypt, had to work a little longer against qualifier Ryan Cuskelly to earn his second round berth. The New York-based Aussie stayed close in the first two games and snatched the third at 11-9. But the former world number one from Cairo responded with a decisive fourth game win, 11-4, to set up his last 16 clash with India’sSaurav Ghosal.

The match between Ghosal and qualifier Shahier Razik – at age 35 the oldest player in the draw – could have gone either way throughout the match. Canadian Razik saved three game balls to win the first opener 15-13. Then Ghosal saved one game ball down 9-10 in the second, by hitting a nick winner off Razik’s serve. 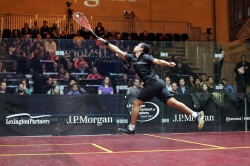 “That was really the difference in the match,” said a weary Razik after the match. “Instead of being down 0/2, we were all tied up.” In the third game, Ghosal sprang ahead to a 10-6 lead; Razik fought back to 9-10, and Ghosal closed it out at 11-9.

In the fourth, the two players exchanged the lead several times, before the Kolkata-born 26-year-old claimed his inaugural second round ToC appearance by winning the game 11-9. 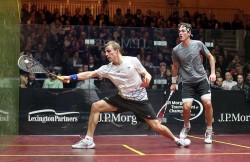 England’s wold No2 Nick Matthew found himself on court a little longer than he would have liked in the first round against his fellow countryman Joe Lee. The defending champion started strongly, winning the first game 11-4, by picking up every ball and attacking at every opportunity.

“I had a bit of a mental lull in the second,” said Matthew, referring to Lee’s capture of that game at 11-8. “So I had to work harder than I would have liked.” The second seed reasserted himself in the third and dominated the fourth to close out the match 11-7, 11-4. 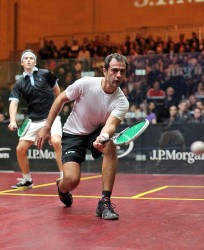 After the match, Matthew confessed: “I made the mistake today of looking ahead before I was finished with this match.” The 32-year-old from Sheffield was referring to the potential second round match with Amr Shabana, two time ToC champion who defeated Matthew in the PSA World Series Finals final earlier this month.

The two will indeed meet in what Matthew referred to as an “unusual” second round match-up between the two former world number ones.

Shabana, whose world ranking dropped to nine in December, when the Tournament of Champions draw was done, fell outside the top eight seeding format used by PSA. Thus, the four-time world champion who had topped the PSA world rankings for 33 straight months starting in April 2006, was subject to the luck of the draw, as was his opponent Matthew.

The consensus among those in the know is that Shabana is lean and hungry and playing consistently dangerous squash. “I still think I am as good as anybody out there,” Shabana said in a post-match interview.

The talented Egyptian wasted no time in getting to the second round as he dismissed English qualifier Chris Simpson, 11-5, 11-7, 11-9 in just 33 minutes.

“I felt like Shabana could play any shot from any corner of the court,” said Simpson, playing on the ToC glass court for the first time.

Shabana was matter of fact as he looked ahead to match with Matthew. “It is just another match,” he said.

After the end of the first round of play, it is the match that has everyone else buzzing with anticipation. 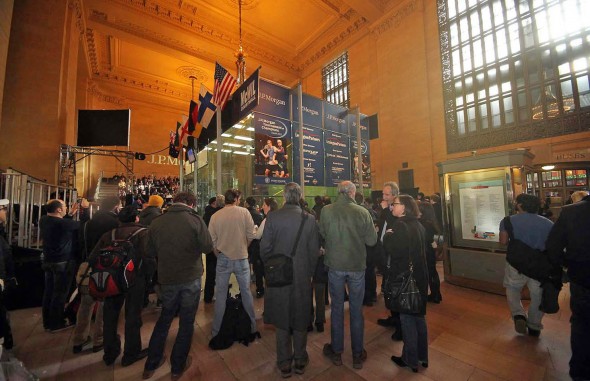