Scotland’s Alan Clyne survived the longest qualifying battle in the JP Morgan Tournament of Champions to earn a place in the main draw of the first PSA World Series squash event of the year in New York.

The desire to be one of the 32 players competing on the glass court in Grand Central Terminal was intensely evident in several of the final round of qualifying matches, but none more so than in the marathon battle between Clyne and Frenchman Mathieu Castagnet. 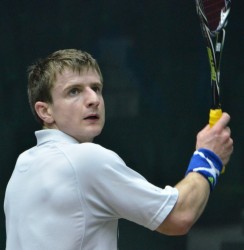 In a match that lasted nearly two hours, both players were relentless, playing long rallies marked by balls hit to great length. Castagnet was up 2/1 when beset by cramps in the fourth game which was won by the Scot. Even with recurring cramps in the fifth game, the Frenchman hung in, but it was 25-year-old Clyne, from Edinburgh, who prevailed 11-7, 11-13, 9-11, 11-5, 12-10 after 108 minutes to earn a berth in the main draw against England’s Adrian Grant.

Aussie Zac Alexander and England’s Chris Ryder also found themselves in a five-game marathon match decided by a two point margin in the fifth. It is Alexander who moves onto the Grand Central court where he will face England’s world No1James Willstrop in the first round.

Amr Khaled Khalifa of Egypt was overcome by the speed and agility of Colombia’s Miguel Angel Rodriguez. After winning a close first game, the 26-year-old from Bogota continued to apply pressure to win the match 11-9, 11-7, 11-7 and earn a main draw first round match up against another Egyptian player, Hisham Mohamed Ashour.

Ong Beng Hee of Malaysia was unfazed by losing the first game against Gregoire Marche of France. In each successive game, Beng Hee prolonged the rallies to wear down his opponent and win the match in four close games. His first round opponent is sixth seed Peter Barker.

After easily winning the first game 11-5, Ryan Cuskelly of Australia found the tables turned as his Hong Kong opponentMax Lee won the second and third games by the identical score. Frustrated by Lee’s persistent retrieving and increasing control of the match, the Australian became frustrated and received several conduct warnings and one conduct stroke before Lee closed out the match 11-2 in the fourth. Lee plays England’s Tom Richards in the first round. 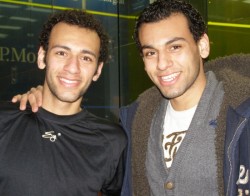 Unranked American Todd Harrity, playing before a fiercely partisan crowd, was put under constant pressure by veteran player Stephen Coppinger. The South African was too quick and too experienced for the Princeton University junior who will return to the classroom while Coppinger’s straight games victory has him facing Nicolas Mueller of Switzerland in first round play.

The youngest player, 18-year-old Marwan El Shorbagy, became the ninth Egyptian player in the Tournament of Champions main draw when he defeated New Zealand’s Martin Knight in four games. The reigning world junior champion, whose older brother Mohamed is also in the draw, was very much looking forward to making his debut on the Grand Central court.

“This is one of the best venues in the world,” said the Egyptian teenager after his first practice session in Grand Central Terminal. “Everyone wants to come play here in New York City, so the draw is very tough. The other players have told me that the stands are filled from the very first round at noon on Friday until the finals.”