Malaysia’s Nicol David, who has led the women’s world rankings since 2006, has been honoured by her Prime Minister.

“On behalf of the government and the people Malaysia, I would like to extend heartiest congratulations to Nicol,” he said. “Nicol should be made a role model because she is the most successful sports icon in our country’s history,” he added.

Nicol David followed her World Open success in Rotterdam by claiming her 57th WISPA World Tour title at the Hong Kong Open, then still found time to lead the WSF Ambassador Programme visit to Latvia at the end of November before heading home to Malaysia for an end-of-year break. 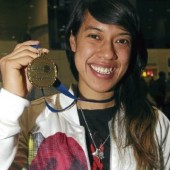 The country’s most successful squash player of all-time was greeted by hundreds of fans on arrival at Kuala Lumpur International Airport – all eager to see her world championship gold medal.

“I played my best match ever to win my sixth World title,” admitted David after her remarkable Rotterdam triumph.

“But I would happily trade all my six world titles for Olympic Gold.”