In today’s final qualifying round of the JSW SDAT WSF World Cup in Chennai, Malaysia produced the event’s first upset by beating fourth seeds France to earn a surprise place in the semi-finals of the World Squash Federation mixed team championship at the Express Avenue Mall.

After early rounds at the Indian Squash Academy, matches were being played for the first time on an all-glass show court sited in the central atrium of the Express Avenue Mall, the largest shopping complex in southern India in which crowds on four floors were able to witness the world-class action. 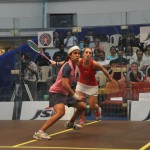 Led by Nicol David, the 27-year-old from Penang who has topped the women’s world rankings since August 2006, fifth seeds Malaysia fell behind when Muhd Asyraf Azan went down 11-4, 11-13, 11-3, 11-0 to top-ranked FrenchmanMathieu Castagnet.

But it took David just 20 minutes to restore order for the underdogs with her 11-2, 11-3, 11-2 dismissal of Coline Aumard, the French number two who is ranked 68 places lower in the world.

But the star of the Malaysian team was K

amran Khan, the 21-year-old from Kuala Lumpur who was making his senior international debut in the event.

Ranked ten places behind French opponent Gregoire Marche, Khan recovered from a heavy defeat in the fourth game to beat the former European Junior champion 5-11, 11-9, 11-3, 2-11, 11-4 in a 71-minute marathon.

‘m really happy to help my team get to the semi-finals,” said the jubilant Malaysian. “It’s my first time at a team event.”

Khan paid tribute to his illustrious world No1 team-mate: “I’ve learned a lot from being around Nicol – she’s not only a very nice person but she has helped me a lot with my game.

“Greg is a good player – I’ve watched him a lot on the PSA Tour, but I haven’t played him since we were about 15. I knew it wouldn’t be easy – but I just tried to play m

“I won the third game easily – and then relaxed too much. I really wanted to win it for Malaysia,” added Khan.

Malaysian team coach Raymond Arnold knew the encounter would be close. “It was even close with South Africa the other day – both ties could have gone either way.

“But I’m really pleased for the players – and it was a massive game for Kamran.”

On hearing that Malaysia will now face defending champions England for a place in the final, Nicol David added: “I’m really pleased get to the semis – Kamran was really strong. I look forward to playing England – but whoever we got would have been tough.”

In the evening match at the Mall, hosts India were taken the full distance by seventh seeds Mexico in the battle for third place in Pool B. 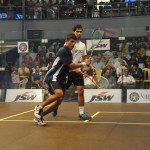 Indian number one Saurav Ghosal thrilled the packed and partisan crowd as he defeated his Mexican counterpart Cesar Salazar 11-4, 11-6, 11-8.

After a hard-fought first game in the deciding match, it was a delighted Indian number two Siddharth Suchde who fought off Jorge Isaac Baltazar Ferreira 11-9, 11-1, 11-3 to celebrate a long-awaited Indian victory in the event before an exuberant crowd. 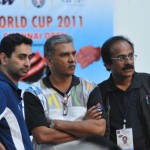 “We played two of the biggest countries in the sport – England and Australia – in the earlier pool ties, so to get this win tonight is very satisfying,” said national coach Cyrus Poncha.

“I’m really proud of what we’ve achieved over the past few years – this is really something amazing.

“This venue is a spectacular place to show off our sport. I was delighted to hear earlier this evening that the average usage of the Mall car park on a Thursday is 65%, yet today it is 95% – and the owners tell us this is entirely down to the appeal of the World Cup.

“The Indian success this week has given us a great platform to build on – so that when the event comes back to Chennai in two years, we will be one of the top countries,” Poncha concluded.

Saurav Ghosal, now the highest-ranked Indian player of all-time and a respected force on the world tour, was also upbeat about the new sport’s newest location: “Playing in a venue like this is a fantastic idea – the crowds are brilliant and it’s great that they having the chance to see a good level of squash. It would be nice to think that some will be inspired to take it up.

“It’s always good to play in places around the world that aren’t dedicated squash venues, so that the sport is seen by people not used to it.

“I really like it when you’re playing in front of a big crowd – that’s what you play sport for.”

But the Kolkata-born 24-year-old was also thrilled with the unique two-men-one-woman team concept: “It’s a brilliant format. In many ways I think it’s better than the normal events we play – and it actually gives a better reflection on how good a country is at squash, mixing both men and women.

“For me, it’s been especially good playing alongside Joshna and Dipika – it’s been great having them around.”

Earlier in the day, the final clash at the Indian Squash Academy saw second seeds England confirm their status as the top team in Pool B by beating long-time rivals Australia, the third seeds, 3/0.

England number one James Willstrop extended his career-long unbeaten run over Cameron Pilley – but, after taking the first two games, the world No4 dropped the third and was behind in the fourth before fighting back to record his 11-6, 11-7, 7-11, 12-10 victory over the tall 28-year-old from New South Wales.

The next match went the full distance, but again the English player Jenny Duncalf pulled out all the stops in the decider to beat long-time rival Rachael Grinham 11-5, 8-11, 11-4, 9-11, 11-9 and reduce the Queenslander’s head-to-head advantage to 9-7.

“The manner of the win was very good,” explained England coach Chris Robertson later. “James had to play some really good stuff to go two-love up. Then he was challenged a bit – but it was good to see the passion he displayed in coming through. The first rubber was pretty crucial.

“Jenny played a high quality game – she responded to the task in the best possible way. It was really pleasing to see her beat Rachael, an experienced opponent,” Robertson continued.

“And in the final game, Peter was very sound in making it a 3/0 win.

“From the team perspective, it was a job well done. After all, Australia came here to win – which you’d expect.

“Overall, it sets us up nicely for the semi-finals,” Robertson concluded.