In a sensational climax to the Springfield Solutions British Grand Prix at the National Squash Centre inManchester, England’s Nick Matthew recovered from a game down to upset top seed and fellow countryman James Willstrop and claim the 25th PSA World Tour title of his career.

The final of the PSA International 70 squash event was marked by milestones: it was the 30th Tour clash between the two Yorkshire rivals since 2001, and the 50th appearance in a Tour final by Matthew, the 32-year-old world number two from Sheffield. 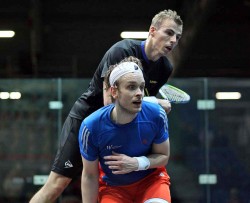 Unbeaten in his previous 14 PSA encounters with Willstrop, world champion Matthew went into the match as favourite – particularly as Willstrop, the world number one, had come through a gruelling two-hour semi-final against third-seeded Frenchman Gregory Gaultier while Matthew spent well under half the time in his win over England team-mate Peter Barker.

But it was Willstrop who started the stronger, quickly taking the lead in the first game, moving from 5-1 to 9-4 with Matthew making uncharacteristic unforced errors.

After losing the game, Matthew settled into the match in the second, lengthening the rallies and opening up a 7-3 lead before taking the game to draw level.

It was Willstrop, however, who started the third game the better, building up a 6-2 lead. Matthew maintained the pressure, pulling back to nine-all and sending an increasingly tiring Willstrop to all corners of the court. 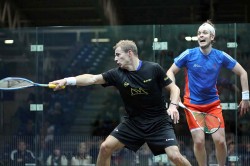 Matthew took the game with a tight dropshot – then continued to dominate early in the fourth. Willstrop dug deep to reverse the run of the game for a brief period, but after saving one match-ball the top seed succumbed to the might of Matthew as the Sheffield man clinched his 4-11, 11-6, 11-9, 11-5 victory in 78 minutes to become the British Grand Prix champion for the first time.

“Everybody talks about James’s racket skills – but he’s also the toughest and fiercest competitor I’ve ever played. It doesn’t matter what he’s done before,” said Matthew in response to MC Sue Wright‘s suggestion that Willstrop’s previous match might have taken its toll.

“His physicality is something to behold,” added the world champion. 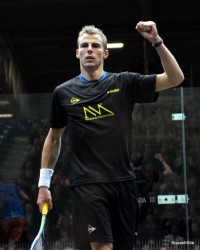 “I made a lot of errors in the first game, but I got it together in the end.”

“It feels great to win this title, it’s a tremendous tournament, the sponsors and the organisers do a great job, and I’m sure that James and I are looking forward to coming back here for the Nationals next year, and then the World Championships in Manchester too.”

Willstrop wasn’t unhappy with his performance: “It was a good quality match, we were both hitting the areas, and even if it maybe wasn’t our sharpest it was still a good, enjoyable match.

“It was level, and very tough, he managed to get through the crucial end of the third game better and that helped him push on in the fourth where I couldn’t quite get it together.

“There’s some stuff I could have done better, but he made it very difficult for me, all credit to him.

“It was a good week, great atmosphere, I really enjoyed it here, you just have to move on, learn, and keep pushing.”