Ashour, appearing in his fifth consecutive final of the PSA World Series squash event, continued his long unbeaten run to delight the full-house crowd of almost 1,000 spectators at the Westwood Club in Richmond, Virginia.

Matthew, who had beaten Ashour in the 2010 and 2011 finals, produced a spirited recovery to win the third game, but Ashour turned on the style again to clinch a second Richmond title.

His previous win in Virginia had also been against Matthew in 2009. 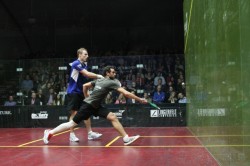 After an even start to the first game, Matthew hit back from 5-3 down to lead 7-6, but Ashour’s electrifying array of winning shots produced four points in a row to take the game.

The 25-year-old from Cairo – both the world number one and reigning world champion – opened up a 7-3 lead in the second, and held game ball at 10-6 before weathering a late revival from the 32-year-old world number two from Sheffield.

Second seed Matthew made a powerful start to the third and established a 6-1 lead with some stunning winners of his own.

His powers of retrieval are simply phenomenal and both players covered every inch of the court as the crowd roared their appreciation.

After winning the third game with a degree of comfort, Matthew led 3-1 at the start of the fourth before Ashour elevated the quality of his play to new heights.

He moved ahead to 7-4 and, at 9-5, when Matthew was awarded a penalty stroke following a video review, the Egyptian responded with a dazzling kill shot, slamming his service return into the nick to move to match ball.

After completing his 31st consecutive victory in his ninth PSA Tour final in a row, Ashour kissed the floor of the Westwood Club and thanked his opponent for a tremendous match. 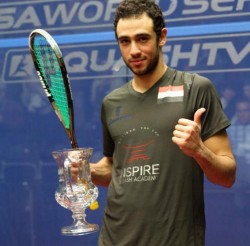 “Nick is a great player and we seem to feed off this rivalry,” said Ashour. “We have met in so many finals and, whoever wins, the other one gets back to work to raise their game to meet the challenge.

“We are both inspiring each other to work even harder. He plays great squash in all four corners of the court and you have to be playing your best squash to beat him.

“Once again the crowd here in Richmond was fantastic, the tournament is organised brilliantly, and I think the whole show this week proves that squash should be in the Olympics.

“All the players love coming to Richmond and the Jefferson Hotel is the best we stay at anywhere in the world so we all look forward to coming back next year.”

Matthew added: “I have played well all week and didn’t really do anything wrong tonight in the final but it shows how well Ramy is playing that you can be playing your best and he can still win these big matches.

“He is on a long winning run at the moment and playing some great squash.”

The Yorkshireman later told his Twitter followers: “Tried everything in my power today to stop the Ramy bandwagon including wearing @uvasquash tshirt in the warm up to get the crowd on my side.

“But the guy is on a roll at the moment. 30 matches unbeaten is great effort. At least it was final not semi. Few days rest then on to Kuwait.”