Londoners Adrian Grant and Peter Barker booked themselves into the quarter-finals of the ROWE British Grand Prix after impressive victories in today’s second round of the PSA World Series squash event in its second year at theNational Squash Centre in Manchester.

Grant, a former world No9 fighting back after a career-threatening hip injury, faced fellow countryman James Willstrop, the world No4 who finished as runner-up in the inaugural event last year.

Left out of England’s world championship team this summer, 30-year-old Grant showed that he is still a force to be reckoned with by upsetting the fourth-seeded Yorkshireman, the England number two, 10-12, 11-7, 11-9, 11-7 to claim an unexpected place in the last eight.

Grant built up a 5-2 lead in the opening game before Willstrop fought back to move 6-5 up. The underdog recovered the momentum to move to game-ball at 10-6 – but again Yorkshireman Willstrop battled back to win six points in a row to capture the first game.

Midway through the second, Grant fell to the floor after turning on his ankle. His three-minute injury break was extended when it became clear that the thumb on his left hand was also bleeding.

Seemingly unaffected by the break, Grant went on to win the next two games – and in the fourth, rallied back from 5-7 down to win six straight points to pull off the biggest victory since his layoff. 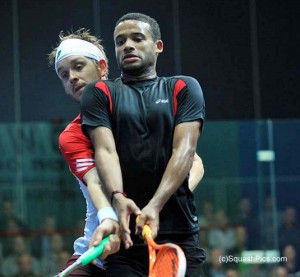 “The first three or four points seemed a bit laboured and I think I panicked when I saw him coming back,” explained world No17 Grant afterwards. “But in the second, I stuck to a solid game-plan.

“By the fourth, I could see he was an inch or two behind – I was snapping at everything and it all came off. But you can’t relax with James – when he’s down he can still be lethal.

“That injury I had was the worst and best thing that ever happened to me. It took me out of the game for a long time, but it gave me the chance to re-assess my approach to the game – and I have come back stronger. 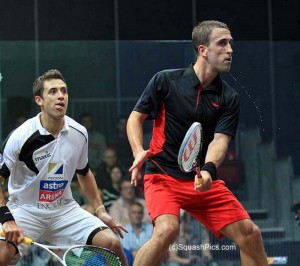 Barker, the world No7, was delighted to record his first Tour win over Malaysian Mohd Azlan Iskandar, ranked six places below.

“But I’m happy to come off 3/0 so that I can conserve some energy for tomorrow.”

Later in the evening, world number one Nick Matthew joined his England team-mates in the quarter-finals after despatching Egyptian Mohd Ali Anwar Reda 11-5, 11-4, 11-4

The 31-year-old from Sheffield will now line up against Barker for a place in the semis. 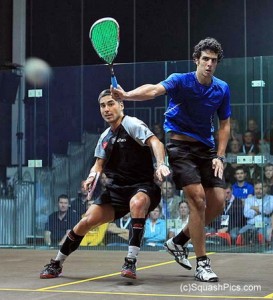 The world No14 from Cairo had only beaten illustrious Frenchman Lincou once before – and that was also after being 2/1 down.

Mosaad, who immediately raced out of the arena to phone his father, later agreed that his opponent was a good player – “a world number one with lots of experience.”

At the beginning of the fourth game he decided to be more focussed. “I changed my game. And I was determined to get a good lead in the fifth to get an early advantage.

“I’m really happy to beat Thierry – it’s my first time in the tournament and it’s great to be in the quarter-finals,” added the 23-year-old.

Despite being downcast, Lincou agreed that the better player won: “The conditions really suited him today – the court was cold and the ball slow – and I just wasn’t able to get into my rhythm.

“He’s a big guy and very powerful, also very accurate,” said the former world number one and world champion. “He really deserved the win – he just outplayed me in the last two games.”

Darwish, the 30-year-old world number three, was full of praise of his younger compatriot: “He’s a great guy. He’s pretty tricky to play, very quick on court and really good at the front. He’s dangerous and has a very good future.” 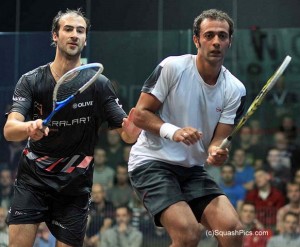 Two more Egyptians will line up at the last eight stage: Four-time world champion Amr Shabana had to be on top of his game to see off German qualifier Simon Rosner.

“He’s much faster and much lighter. He’s the next German player to bring squash back to Europe.

“He took me out of my comfort zone. I was happy to get away in four,” added the fifth seed.

With four world titles and 33 months as world number one to his name, did Shabana still have outstanding goals? “It would be nice to have a shot at being world number one again, or winning another World Open. If I did one of them, it would cap off my career nicely!”

It was a disappointing end to a great run by top-ranked German Rosner: “It wasn’t easy. He’s difficult to read and puts you under a lot of pressure. I gave it my best,” said the 23-year-old from Paderborn.

Gregory Gaultier avenged Lincou’s defeat by making sure of French interest in the last eight. The sixth seed from Aix-en-Provence defeated England’s Daryl Selby 11-2, 10-12, 11-4, 11-4 in 61 minutes – repeating his win over the world No11 from Essex at the quarter-final stage last year.

Ramy Ashour became the fourth Egyptian through when he beat Australian Cameron Pilley 11-7, 11-8, 12-14, 11-3. The title-holder from Cairo will now face Gaultier for a place in the semis.