Local interest in the El Gouna International Open remains high as former world number ones Amr Shabana and Ramy Ashour led four Egyptians through the second day of first round action in the third PSA World Series squash event of the year at Abu Tig Marina in the Red Sea resort of El Gouna.

Fifth seed Shabana took on young compatriot Karim Abdel Gawad. The four-time world champion imposed himself on the opening game to move ahead – but 20-year-old Gawad made a real fight of it in the next two. The experienced Shabana maintained the upper hand, however, to secure his place in the next round after an 11-4, 11-9, 11-9 victory in 40 minutes.

“The court we played on in Rotterdam during the worlds suited his game better, because he’s got some sting in his shots, but this glass court is a bit slower, so it was better for my game,” said Shabana, the 32-year-old world No6. “Still, it was very close, 11-9, 11-9 – it could have gone either way. And his game is like his personality: calm but deadly!” 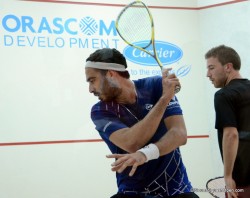 Shabana progresses to meet another fellow countryman after Hisham Mohd Ashour recovered from a game down to beat French qualifier Mathieu Castagnet 9-11, 11-8, 14-12, 11-9.

“He is a strong man on court, he is like the Shark in the movies – you think you’ve killed it, and it keeps coming back at you!” quipped the world No16 from Cairo. “I’m pretty happy with my performance,” he added.

Later in the day, Hisham’s younger brother Ramy Ashour came through against his fellow former world junior championAmr Khaled Khalifa. Underdog Khalifa played well to push the fifth seed in the first before losing it 11-7, but then opened up a 9-3 lead in the second. 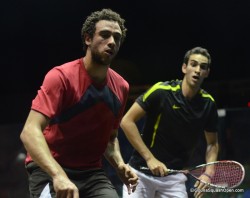 Ashour, looking trim, was happy with his performance, some of which he put down to a new regime and attitude: “I thought that I was dedicated before, but now, I’m actually realising that I’m learning the true meaning of it. And it’s like, before, I was a squash player when I was on court, and thinking about other things off court. But now, I am a squash player all the time!” 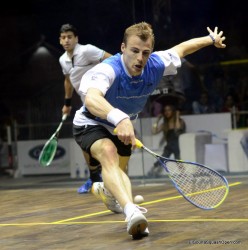 “I had never seen Andrew play before, so I had to give him all the respect due, but after a while, I got used to the conditions, and felt pretty comfortable,” said the 31-year-old from Sheffield.

Matthew now faces a second local player Mohd Ali Anwar Reda. “I have a lot of Egyptians in my draw, I just hope I can keep the English flag going,” he added.

Round one was completed as France’s second seed Gregory Gaultier despatched world junior champion Marwan El Shorbagy in just over half an hour. The Egyptian teenager challenged at the end of the second game as Gaultier made a few errors on game ball, but left no room for error in the third as he advanced to an all-European second round with Simon Rosner.

“Marwan played extremely well, he has a lot of good shots and moves very fast to the front, so it was perfect to test myself, and to get back into business,” said Gaultier. 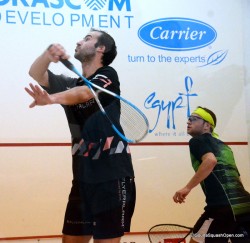 “I think that’s the best I ever saw Greg play,” said a relieved Rosner, the world No24 from Paderborn. “He didn’t give my any cheap point for the whole first four games, and I got frustrated more and more, I just didn’t know what to change tactically. I don’t think I played badly, he just played so well, really well.”

“He was the last opponent I played, and neither of us wanted to play each other again so soon but that’s how it goes sometimes,” said the world No17 from London, ranked five places below his opponent. “The court was to my advantage, but he was at home in Egypt, so it balanced things I guess! It was a tough draw for both of us, but it’s really nice to beat him here.”