Malaysia’s Nicol David moved ahead of her Tour title tally in 2009 when she picked up her eighth WISPA World Tour squash trophy of the year by beating Australian rival Rachael Grinham in the final of the inaugural Women’s Torneo International Bicentenario Mexico at the Plaza Civica de Toluca in Toluca.

Unbeaten in any event so far in 2010, the world number one from Penang arrived in Mexico fresh from her maiden gold medal success in the Commonwealth Games in Delhi.

“As with the semi-final, it was important to win the first game as I know how dangerous Rachael can be and I just had to keep getting her shots back,” explained David after recording the 49th Tour title success of her career.

“It has been great to have so many Mexican fans here, and I want to thank everyone that has been involved in the event as it is fantastic – the setting, the crowds and everything,” continued the 27-year-old.

“I had been talking to Samantha (Teran) about getting an event here and now she has made it happen. I played an exhibition with her here two years ago and I could see the enthusiasm then, so I knew it would be a fun event for all the girls.”

Grinham, the former world number one from Queensland who has now faced the Malaysian 31 times over the past ten years, was upbeat after the match: “It’s nice to get to a final again, and I am motivated at the moment and want to keep enjoying my squash so hopefully there will be some more.

“Nicol has proved she is the best in the world, so all you can do is to try and make her work as hard as possible to beat you.”

WISPA World Tour stalwarts Nicol David and Rachael Grinham will lock horns for the 31st time in their careers when they meet in the final of the inaugural Women’s Torneo International Bicentenario Mexico after surviving contrasting semi-finals in the $67,500 squash championship at the Plaza Civica de Toluca in Toluca.

The opening semi-final in the first WISPA Gold event ever to be staged in Mexico was a classic affair, with the deft lobs and drops of third seed Grinham countered by the supreme athleticism of Kasey Brown.

The two Aussies traded shot for shot, but despite her five-game win the previous day – when the fifth seed upset second-seeded Englishwoman Jenny Duncalf – it was Brown who came out faster, powering her way through the first.

However, former world number one Grinham is known for her clever play – and, taking the pace off the ball, she deadened Brown’s attack and raced away with the second. Maintaining a similar pattern, Grinham took the third and looked to be cruising to victory at 4-0 in the fourth.

But Brown, winner of three medals in the Commonwealth Games in Delhi, had other ideas – and stepped up the court, mixing short sharp volleys with fierce drives as she pegged the game back to 9-9 before drawing level.

Malaysian starlet Nicol David booked her place in the final with a composed win over talented young Egyptian Raneem El Weleily. The 21-year-old from Alexandria started well with some exquisite squash, striking the ball purely and easing to a 5-2 lead.

However, David hasn’t remained unbeaten for 12 months by panicking at such an early stage – and steadily turned up the pressure on her younger opponent before gaining her 12-10, 11-6, 11-6 victory over the sixth seed.

“It was good to get through in three games,” said the relieved 27-year-old Malaysian afterwards. “I expected at least four as Raneem is so talented. The first was a bonus as she started well.”

Nicol David first met Rachael Grinham in the final of the Milo Open in Kuala Lumpur in 2000 – when Grinham was top seed and 16-year-old David was seeded six. The Australian came out on top – but has since seen David build up a 24-6 career head-to-head lead.

“Nicol and I used to play a lot, but that was when I used to make more finals,” explained 33-year-old Grinham as she looked forward to the Mexican final. “We played in Hong Kong but it will be nice to have another match with her.

“The altitude makes it difficult to decide how tired you feel, so I’m hoping I will be fine tomorrow.”

David will be celebrating her 64th career Tour final in Toluca, while Grinham will be marking her 57th.

England’s world number two Jenny Duncalf, a semi-finalist in all but one of the last ten WISPA World Tour squash events in which she has competed, crashed out of the quarter-finals of the $67,500 Women’s Torneo International Bicentenario Mexico at the Plaza Civica de Toluca in Toluca after losing to Australian Kasey Brown in the first WISPA Gold event to be staged in Mexico.

Duncalf arrived in Mexico with two silver Commonwealth Games medals to her name from Delhi earlier in the month – but Brown, the world No9 from New South Wales, bagged three medals, including gold in the Mixed Doubles.

“It’s nice to beat someone for the first time, as it gives you the confidence that your game is moving in the right direction,” said a jubilant Brown afterwards.

An all-Australian battle now faces Brown when she takes on Rachael Grinham, the third seed from Queensland who killed off local hopes for success by beating seventh seed Samantha Teran 11-9, 11-3, 11-8.

Teran came out to a boisterous welcome – and the 29-year-old from Mexico City didn’t let her fans down as she jumped straight to a 5-1 lead in the first game.

“It’s great making a semi-final in a major event as it has been so tough to do so over the past year,” admitted former world champion Grinham afterwards. “I am really enjoying playing at the moment and look forward to playing Kasey, who is clearly in form, tomorrow.

“It’s actually fun playing someone in their home country – the atmosphere is just as electric when you play Nicol in Malaysia.”

Nicol David duly earned her place in the other semi after dismissing New Zealand’s No8 seed Jaclyn Hawkes 11-8, 11-2, 11-6. The world number one from Penang will face surprise opponent Raneem El Weleily, the sixth seed from Egypt who overcame No4 seed Madeline Perry 11-8, 11-8, 11-9 in her first ever win over the world No6 from Ireland.

“I played well today and enjoyed the match,” said 21-year-old El Weleily afterwards. “It will be tough playing Nicol tomorrow but it should be fun to play her, especially in the semi final of a major event.”

Appearing in her first Tour event since winning gold at the Commonwealth Games in Delhi, world number one David despatched Diaz 11-4, 11-5, 11-5 in her opening match in the first WISPA Gold event ever to be staged in Mexico.

At the post-match press conference, David explained how all of the players have arrived early to get used to the altitude. “Although you notice it a little in the first couple of days you start to get used to it,” explained the 27-year-old from Penang. “It’s great to play in such a public and stunning setting, and I am sure that this event will motivate Mexicans to play squash.

“Sam (Teran) has already shown it is possible to be very successful and she is one of the main reasons this event is on. Thanks Sam!”

David will next face eighth seed Jaclyn Hawkes. The New Zealander showed no mercy in progressing to the last eight at the expense of another Mexican, qualifier Karina Heredia Gonzalez, winning 11-2, 11-2, 11-0 in just 15 minutes.

Earlier, Raneem El Weleily started off the second day of first round action in fine form by knocking out USA’s Latasha Khan. The skilful Egyptian seemed unperturbed by the altitude causing the ball to speed off the front wall and cruised to an 11-6, 11-5, 11-9 victory.

The sixth seed will now line up against Ireland’s Madeline Perry. The No4 seed took the first two games against Annie Au, but had to save three game balls against the rising star from Hong Kong before winning 11-9, 11-6, 13-11.

A packed press conference greeted Samantha Teran after the local favourite left the court following her straight games victory over US qualifier Olivia Blatchford in the opening round of the inaugural Women’s Torneo International Bicentenario Mexico, a $67,500 WISPA World Tour squash event at the Estado De Mexico in Toluca.

Spurred in by a crowd chanting ‘Mexico, Mexico’, Teran showed that she is back to full fitness after an ankle injury that ruled her out of last month’s METROsquash US Open by beating 17-year-old New Yorker Blatchford 11-3, 11-6, 11-5. 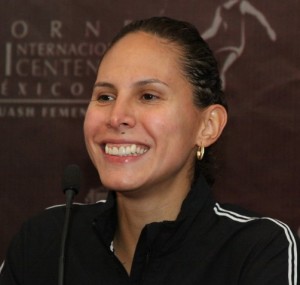 “Obviously it is fantastic to play in front of your home crowd, and I really wanted to win for them and everyone who has put so much effort into putting on this event,” said the 29-year-old No7 seed from Mexico City – her country’s highest-ranked woman of all-time.

Earlier, a crowd of over 800 graced Toluca’s Plaza Civica to witness the official opening, followed by the first round of the first WISPA Gold event ever to be staged in Mexico. A host of local dignitaries, including a representative of the Mayor of Toluca Enrique Pena Nieto, aided by World No1 Nicol David and Teran officially opened the proceedings on the Manata All Glass Court.

The play got underway with an impressive display by Australian Kasey Brown. Coming to the event off the back of winning three Commonwealth Games medals in Delhi, Brown was in impressive form in blowing away Hong Kong’s Rebecca Chiu.

“It’s not often that I win quickly, so it’s great to get through relatively easily as this could prove to be a tough week at altitude,” said the New York-based fifth seed. “Obviously the (singles) bronze in Delhi has given me a lot of confidence so I am looking forward to a good week here.”

England’s world No2 Jenny Duncalf set up a clash with Brown with a straight games victory over compatriot Emma Beddoes. Duncalf, the silver medallist in Delhi, looked in fine fettle as she worked Beddoes around the court before putting the ball away with trademark drops and volley drops.

“It’s a great venue to play in and wonderful to see so many people turn out to watch a squash event,” said Duncalf in the post-match press conference after her 11-8, 11-7, 11-5 victory.

Australia’s former world No1 and world champion Rachael Grinham soon quietened the expectant crowd as she raced through the first game 11-1 against Mexican qualifier Nayelly Hernandez. However, the 24-year-old – ranked 136 places below the Australian – proved she wasn’t overawed by matching her experienced opponent point for point in the second – and indeed holding a game ball at 10/9.