New Zealand qualifier Joelle King creates a stunning upset in the quarter-finals of the Delaware Investments U.S. Open in Philadelphia to set up a semi-final with top seed Nicol David, while men’s top seed James Willstrop is sorely tested by Mohamed El Shorbagy before progressing to meet Gregory Gaultier in the semi-finals. 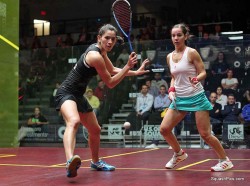 Joelle King recorded the biggest win of her career so far after scalping No.3 seed Jenny Duncalf in the Delaware Investments U.S. Open.

The quarter-finals, split over two days at Drexel University in Philadelphia, saw the Kiwi clinch the fifth-game winner against Englishwoman Duncalf, who has now failed to make a World Series semi-final since this event last year. 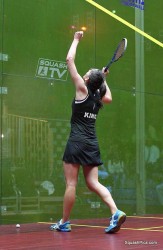 Both players were generous with the amount of shots hitting the tin, but it was the New Zealander who gained control after a shaky first game to dominate the proceedings.  Errors crept back into King’s game in the fourth, as the prospect of a semi-final appearance loomed, and Duncalf seized the opportunity to force the fifth game.

A refocused King leapt to a startling 5-0 lead in the deciding game, and her English opponent, despite a small reprieve, never closed the gap.

“There’s less pressure on you when you’re not the seeded players,” explained a delighted winner, “but I’ve been at this level for a while and been close to some big wins so the pressure was maybe from myself.

“I’m absolutely stoked to get through, it’s my first semi-final of a Gold event, let alone a World Series, I’m so pleased!”

Maiden semi-final appearances don’t get much tougher for King, as she will face Nicol David in the next round on Thursday. 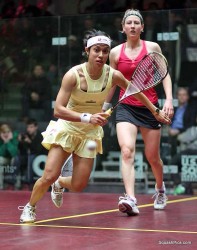 Having lost for the first time against her opponent Alison Waters in their previous contest, David made absolutely certain of her progression on this occasion.  Playing like a woman scorned, David leapt to an 11-5 win in the first game with blisteringly quick retrieval and efficient front court play.  In the second and third games, she dominated less but was always just a step above the level of Waters. 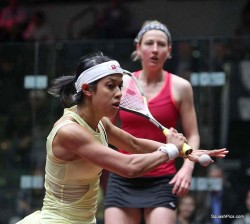 The Englishwoman led 9-8 in the third, but the dominant Malaysian upped the pace in the final rallies and put the contest to bed with some strong lengths and forced one final mistake from the racket of Waters to end the tie.

“She was always going to be up for it having beaten me last week,” said a relieved and delighted winner, “so I knew I had to start strong and fight for every point to stop her getting the feeling she had it again.

“I think I got used to playing on the court a bit quicker than her, but in the third she was finding her length better and becoming more comfortable, it was neck and neck so I was really pleased to finish it in three.” 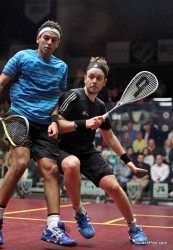 Helped by a series of errors from his 21-year-old opponent, the experienced Willstrop took the first game – but El Shorbagy stepped up the pace, cutting down the errors, and for the next three games there was little to choose between the two. 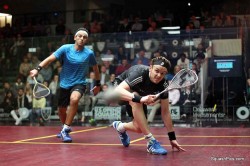 After world No8 El Shorbagy levelled the match to force a decider, the English favourite’s superior control and physical conditioning started to pay dividends and Willstrop raced to a stunning 10-0 lead.

At ten match-balls down, El Shorbagy finally found a dropshot to prevent a whitewash – and raised his arms, screaming “yes”, to the delight of the crowd.

Four more points, all from crisp winners followed, and thoughts started to turn to the impossible comeback. 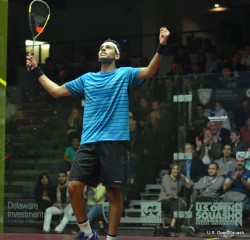 “I had a good first, but then he started playing at a really good pace and I was failing to take the chances I gave myself at the front,” said the 29-year-old from Leeds later. “I was a bit weak and tentative in that area and that helped him. 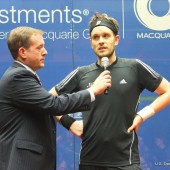 “I was pleased with the fifth, mentally and physically, but when he starts coming back hitting winners you just have to play your game and not panic. If he’d made it, you’d have to take your hat off to him, but it was unlikely.

“I’m pleased to get through a match like that, and the format of this tournament – with split first round and quarters – is best for the players, so I’ll be able to get a bit of recovery tomorrow.” 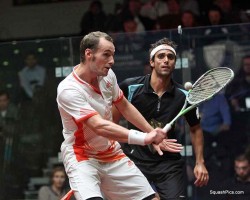 Willstrop will face career-long French rival Gregory Gaultier for a place in the final. The third seed from Aix-en-Provence was facing fifth-seeded Egyptian Karim Darwish for the 16th time on the PSA Tour since 2007 – but the first since both became fathers for the first time recently.

After too many errors in the game, Gaultier recovered to find improved consistency in the second and proceeded to dominate the rest of the match – showing determination when necessary as well as his renowned shot-making skills to win 6-11, 11-5, 11-5, 11-4 in 61 minutes. 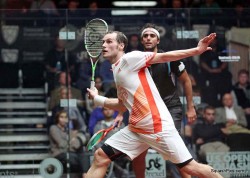 “I struggled at the beginning,” admitted Gaultier, who now meets Willstrop for the first time since their epic 118-minuteBritish Grand Prix semi-final last month.

“I had the wrong strategy, going to the front too soon and he dominated me. I changed my tactics completely at the start of the second, tried to push him to the back and take things on the volley as much as I could and it paid off.

“I’m happy to play James again. We had an unbelievable match in Manchester and I’m looking forward to trying to get my revenge.”