The top seed admitted that his priority was to contain Ashour’s shot-making opportunities in the second PSA World Seriesevent of the year – but his own play at the front of the court was immaculate. 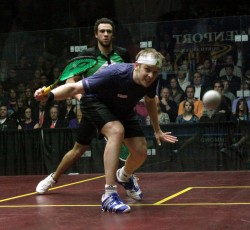 Willstrop’s volley-drops, especially, worked to perfection on both sides of the court. At 6ft 4in, the Yorkshireman is the tallest player competing on the PSA World Tour and Ashour, like so many opponents, struggled to place the ball beyond Willstrop’s reach.

Ashour had stunned England’s world champion Nick Matthew the previous evening with a dazzling display containing a succession of outrageous winners, but he had no answer to Willstrop’s consistent, measured play.

Making his Tour comeback after sustaining a hamstring injury in the World Open in November, Ashour was celebrating his fourth consecutive appearance in the NAO final – and beat Willstrop in last year’s semi-finals.

Willstrop had taken 97 minutes to beat Frenchman Gregory Gaultier the previous evening, but said he felt no ill-effects. “That gave me confidence coming into the match. I knew what to expect with a player of Ramy’s abilities and I had to find a way to stop him hitting winners. 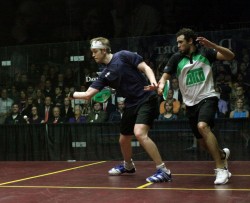 Willstrop’s performances this week have propelled him back to the world number one position in March. He added: “That was a wonderful feeling over Christmas knowing that I was going to be number one for the first time and I was very disappointed to lose it the next month.

“It made me determined to win it back, and I was pleased to play well enough to get back to number one in March.

“However, you don’t need extra motivation to play in events like this,” added the 28-year-old from Leeds. “This is a superb tournament, brilliantly organised by Gus Cook and his team, and when you are looked after so well it helps you to play your best squash.”

Willstrop began solidly and moved smoothly into a 5-0 lead, a pointer for the dominance that was to follow. Ashour fought back to 5-8 but Willstrop was too far ahead and closed out the game 11-7.

The second was much tighter but from 5-5 Willstrop tightened up to win it 11-8.

Ashour led 7-6 in the third and the Richmond crowd were roaring encouragement every time he won a point, especially when he flicked the ball into the nick while off balance, but Willstrop again turned the screw. His immaculate precision produced a crucial run of points as he edged towards the title. 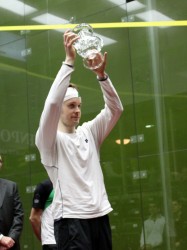 Ashour hit a volley into the tin to put Willstrop level at 7-7, and a loose shot from the Egyptian gave Willstrop a simple straight drive winner to the back of the court.

Ashour was then unable to scrape a Willstrop shot off the side wall and the tall Yorkshireman moved to match ball with a forehand drop. He clinched the match when Ashour conceded a penalty stroke in the front left corner.

“I don’t think many people expected that,” tweeted world champion Matthew. “James played a tactical master-class and deserved the win.”

Willstrop was celebrating his sixth PSA Tour final in his last eight events – and has now racked up his fourth Tour title since November, and the 16th of his career.