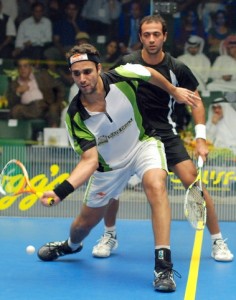 “We know each other’s game so well, we both take the ball so early, and they were some accidents as we were going for the ball. But it was a fair game, a clean game,” Darwish told www.squashsite.com afterwards.

“It was more of a mental match than a physical one,” added the 29-year-old from Cairo. “In the middle of the third, we had some crucial points, I gave it a bit push to make sure I would come on top leading 2/1. And after that, I think he lost a bit of his focus, and I gave it a good push to finish.

“When you come to a tournament, you want to win – but you can’t expect to win nowadays, as the competition is fierce and there are so many formidable players around,” concluded Darwish, who won the El Gouna International in Egypt last month and now boasts 19 PSA Tour titles.

Despite two 70-minute matches leading to the final, Shabana had no excuses: “Both of us had strong matches earlier in the week, so I can’t blame this defeat on a long match!

“In the second, he played far too well, my length dropped and he took full advantage of it,” explained the former world number one. “But in the third, I had my chances. But today was not to be my day.”

The Qatar triumph sees Darwish move up to third place in the latest 2010 PSA Super Series Rankings, the penultimate list before the final event of the year – the Punj Lloyd PSA Masters in Delhi in December. Egypt’s world No1 Ramy Ashour heads the rankings, with Nick Matthew in second place. England’s Peter Barker strengthened his all-important position in the top eight, 30 points ahead of ninth-placed Australian David Palmer.