England’s James Willstrop won the biggest title of his career when he beat Egypt’s Karim Darwish in tonight’s final of the inaugural Kuwait PSA Cup, the eighth and penultimate PSA World Series squash event of the year at Green Island in Kuwait City.

It rounded off a sensational ten-day period for the 28-year-old from Leeds who won his first World Series title of the year at last week’s Hong Kong Open – again beating Darwish in the final – and can now look forward to returning to second place in the world rankings for the first time since first achieving his career-high ranking exactly six years ago. 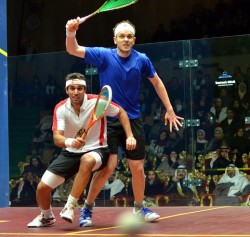 The Englishman won a close first game, pulling away from six-all to take the lead. The Egyptian got the better start in the second and led 6-3, but Willstrop recovered to earn a game ball at 10-9.

But after a rare sequence of unforced errors from the Yorkshireman, it was Darwish who took the game to draw level – thus ending Willstrop’s run of 28 consecutive games without defeat.

The tall Englishman, seeded three, was immediately back in front in the third, leading 6-1 before taking the game. It was one-way traffic in the fourth – Darwish only scoring two points as Willstrop marched on to close out the match 11-7, 10-12, 11-4, 11-2 to win his first title in Kuwait.

“I’m incredibly pleased,” Willstrop told www.squashsite.com afterwards. “When you try and backup two tournaments, the odds are against you – but I was pleased with the way I played, and maybe you actually can manage back to back wins when you keep on winning 3/0. That way, you put yourself under less pressure physically, even though it’s still a hard battle mentally, turning up for every match, and trying to win each and every one. 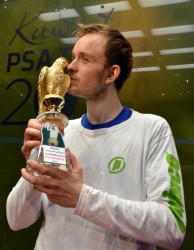 “I’ve been receiving tremendous help from my team back home that helped me improve my physical side. And I basically adapted my squash to my physical constitution,” added the new Kuwait champion who will now turn his attention to the Punj Lloyd PSA Masters, the last World Series event of the year next month in India.

“Can I win three in a row? Well, I guess it can be done,” said Willstrop. “If I can produce squash like that, I can win the next one! And I’m not going to let the fact that it’s three in a row get in the way!”

Darwish was not entirely unhappy with the outcome: “In the third, I didn’t hit the wall physically, but mentally more. I was fine physically, but I was just frustrated, I just couldn’t get the ball to the back of the court anymore,” said the 30-year-old from Cairo.

“I’m very happy with two finals in a row, it’s very positive – and now I’m going to go home and get ready for India and the rest of the season.”