The climax to an incredible end-of-year run by James Willstrop on the international squash circuit saw the Englishman clinch his third successive PSA World Series title at the Punj Lloyd PSA Masters in India in a victory which will ensure his status as world number one in the January Dunlop PSA rankings.

The 28-year-old from Leeds, whose title triumphs in the Hong Kong Open and Kuwait PSA Cup in November catapulted him to second place in the world rankings this month, faced French rival Gregory Gaultier in the climax of the ninth and final PSA World Series event of the year at the Siri Fort Complex in the Indian capital New Delhi.

Willstrop went into the match with 14 successive Tour match wins under his belt since November – but was lining up against the last player who beat him, in the World Open semi-finals in Rotterdam. 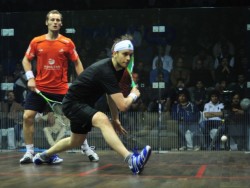 And the opening game was a classic. The battle lasted almost an hour, with rarely more than a point separating the pair until the Frenchman emerged the winner 21-19 after one of the highest-scoring games in the history of the ‘PAR to 11’ scoring system.

But Willstrop fought back in the second game to draw level and was in control in the third as it became clear that all was not well with his opponent.

After treatment in the break, world No3 Gaultier returned to the court – but was clearly suffering from cramp. After a few points, the Frenchman conceded the match to give Willstrop the title, and much more!

“We’ve been proud to play this event for three years now – we’ve been extremely well looked after. It’s been a very enjoyable event to play in – so thanks to everybody involved, especially Punj Lloyd.”

It was in India that Willstrop won his first major title – the World Junior Championship – in 2002, and at the same venue in New Delhi eight years later that he contested the Commonwealth Games final. But it required victory in today’s final for Willstrop to overtake the ranking points average of fellow Yorkshireman Nick Matthew, thereby succeeding his England team-mate at the top of the first world rankings of the New Year. 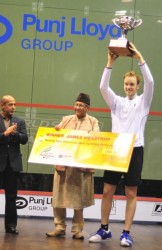 “There are so many people back home to give thanks to – but I think might avoid doing that as I’ll just forget some very important people,” continued the new PSA Masters champion, now winner of 15 career PSA World Tour titles.

“It’s a very special day for me. I can’t really believe I’ve played and won this match – and I’d like to thank Greg for the great spirit in which it was played.

“It’s special to have achieved this here with so many close people here, including my girl-friend Vanessa (Atkinson), a fantastic and loyal friend; my Dad, Malcolm, who’s given me an incredible amount of attention since the start; and my brother David, the endless sessions and work we’ve put in together; and Mick (Todd).

“To have had them here has made such a difference. If I’d done it here alone on this day – and Greg talked about not having his team with him here, but I’ve been lucky as we planned this – it’s just the most special thing: they’ve given me so much!

“The day is so special – it wouldn’t mean half as much if I hadn’t had these people behind me.

The success also means that Willstrop heads the 2011 Dunlop PSA World Series Standings, and that the line-up for January’s ATCO PSA World Series Finals – which features the top eight players in the list – is now finalised.