The latest edition of the WSF Newsletter, for  May 2010 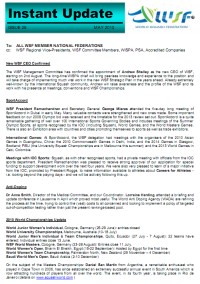 The WSF Management Committee has confirmed the appointment of Andrew Shelley as the new CEO of WSF, starting on 2nd August. The long-time WISPA chief will bring peerless knowledge and experience to the position and will take charge of implementing much vital work in the new WSF Strategic Plan in the years ahead. Already extremely well-known by the international Squash community, Andrew will raise awareness and the profile of the WSF and its work with his presence at meetings, conventions and WSF Championships.

WSF President Ramachandran and Secretary General  George Mieras attended the five-day long meeting of SportAccord in Dubai in early May. Many valuable contacts were strengthened and new ones made. Some important feedback on our 2009 Olympic bid was received and the timetable for the 2013 review set out. SportAccord is a quite remarkable gathering of well over 100 International Sports Governing Bodies and includes meetings of the Summer Olympic Sports, all sports recognised by the IOC (including Squash), World Games, and the World Masters Games.

There is also an Exhibition area with countries and cities promoting themselves to sports as well as trade exhibitors.

International Games:  At SportAccord, the WSF delegation had meetings with the organisers of the 2010 Asian Games in Guangzhou, China; the 2010 Commonwealth Games in Delhi, India, and the 2014 Games in Glasgow, Scotland; FISU (the University Squash Championships are in Melbourne this summer); and the 2013 World Games in Cabi, Colombia.

Meetings with IOC Sports: Squash, as with other recognised sports, had a private meeting with officials from the IOC sports department. President Ramachandran was pleased to  receive strong approval of  our application for special funding to support development work over the next four years. We were also very pleased to learn of a major initiative from the IOC, promoted by President Rogge, to make information available to athletes about Careers for Athletes – i.e. looking beyond the playing days – and we will be actively following this up.

Dr Anne Smith, Director of the Medical Committee, and our Co-ordinator, Lorraine Harding, attended a briefing and update conference in Lausanne in April which proved most useful. The World Anti Doping Agency (WADA) are refining the process all the time, trying to control the (vast) costs to all concerned and looking to implement a policy of targeted out-of-competition testing rather than just the present rankings-based pool.

On the subject of the Masters Championships:  Daniel San Martin from Argentina, a remarkable enthusiast who played in Cape Town in 2006, has since established an extremely successful annual event in South America which is now attracting hundreds of players from  all over the world. The event, in its fourth year, is taking place in Rio de Janeiro (details on www.squashworld.com )

This year is a milestone one – featuring the 40th AGM of  the WSF. It will be held at Fisherman’s Cove, south of Chennai, in India, from 19-22 October. Details of registration and the timetable have recently been distributed.

As predicted, Malaysia made a clean sweep of the individual titles in the Asian Championships – thanks to Nicol David and Mohd Azlan Iskandar – but, against expectations, Pakistan and Hong Kong picked up the team titles in Chennai. Hosts India reached the women’s team final for the first time, but lost out to Hong Kong – winners of the title for the first time in 10 years.

Pakistan beat defending champions Malaysia in the men’s final to reclaim the title after six years.

The big shock in the European Team Championships was England’s first ever defeat in the 33-year history of the women’s event! Their semi-final victors Netherlands went on to win the title for the first time. England and France contested the men’s final for the tenth time in the past 11 years! But hosts France were unable to exploit home advantage and went down 4/0 to their staunch European rivals.

US teenager Amanda Sobhy concluded a remarkable four-month Tour run on home soil by winning last month’s New England Open to become the first 16-year-old ever to win four WISPA World Tour titles. Only two weeks earlier, Sobhy upset the top seed in the final of the Racquet Club International in St Louis to clinch her third Tour crown, thereby overtaking Malaysia’s reigning world number one Nicol David’s two-title record established as a 16-year-old in July 2000. US Squash CEO Kevin Klipstein said: “US SQUASH is very proud of Amanda and what she has managed to accomplish. This success is a tribute to her hard work and dedication and an indicator of the increasing strength of junior squash in the United States.”

A dramatic semi-finals day in last month’s $150,000 Sky Open in Cairo saw a straight games defeat of Egypt’s top seed Ramy Ashour followed by a four-game win by Nick Matthew which ensured that the Englishman will top the PSA world rankings for the first time this month. Matthew went on to win the Super Series title, the biggest of the year to date, and will become the first England world number one for six years.