Indian number two Ramit Tandon survived a nail-biting decider in the SDAT WSF Under-21 World Cup semi-finals today against France at the Express Avenue Mall in Chennai to take the hosts into Sunday’s climax of the inaugural World Squash Federation event – thus marking India‘s first ever appearance in a world squash final.

The clash on the unique ASB GlassCourt – an all-glass showcourt featuring a pioneering new glass floor with under-floor LED lighting – in the atrium of the largest shopping complex in southern India attracted a rolling crowd of some 50,000 partisan spectators, watching the action from vantage points on four floors. 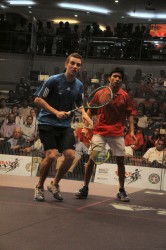 Underdogs India, the fourth seeds, opened their account against third seeds France with Ravi Dixit taking on FrenchmanLucas Serme. The quality of the match which ensued belied the pair’s world rankings – 183 and 139, respectively – and after 65 minutes it was Serme who claimed the advantage, beating the 20-year-old from Chennai 11-6, 8-11, 11-6, 11-7.

“It was good playing in front of this great crowd – but I had to try and block them out and think of my team,” said the 19-year-old Frenchman. “I really enjoyed the match and I am very happy to win.

“It was definitely the toughest match of the tournament. I thought it would be an easier match than the one against Charles (Sharpes) – but I didn’t take into account the crowd. I mentally had to really push myself. I’m so happy.” 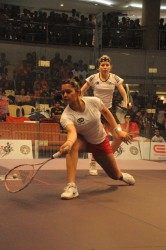 After the subdued reaction from the crowd, the decibels increased noticeably as local heroine Dipika Pallikal, the Chennai born and bred 20-year-old who boasts a world No14 ranking, took apart France’s Chloe Mesic 11-3, 11-4, 11-5 in just 26 minutes to bring the hosts back into contention.

Kolkata-born Ramit Tandon has seen his world ranking slip to 333 since taking up an Economics course at Columbia University in the USA last year. But the 19-year-old showed no signs of inferiority as he battled with Frenchman Geoffrey Demont, ranked almost 200 places higher. 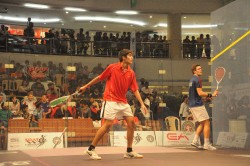 Dixit took the opener, then responded to the Frenchman’s second game win by capturing the third for the loss of just two points.

Demont led briefly in the dramatic fourth – but it was Tandon who kept his focus to reach match-ball at 10-6. The Frenchman saved four before going on to have his own game-ball – but, urged on by the crowd and his hysterical team-mates, the local star finally clinched victory at the sixth attempt 11-5, 6-11, 11-2, 14-12 after 57 minutes to take his country into a historic final.

The crowd went wild and Tandon was quickly engulfed by his team-mates and other supporters on the court. 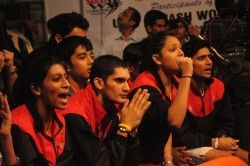 “We’ve worked hard for this – but I did feel a lot of pressure in that match,” admitted the beaming Indian star afterwards. “At 10-6 in the fourth, I just got too excited and made too many errors. But my team helped me through.

“It was great to play in front of such a big crowd – my brother and my Dad were here too, plus a lot of friends.”

After winning her earlier match, Pallikal said: “It was disappointing that we lost the first match – but I had to go on and just play my game.”

After the match which followed, the Indian champion added: “It was a nerve-wracking – but Ramit played incredibly well and it was a great result to get us into the final.

“It’s something we’ve all trained hard for – and it’s great that it’s happened here in Chennai.” 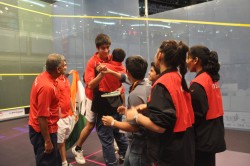 “It’s good to show the results of all the efforts over the last ten years – started by the commitment by Mr Ramachandran, now the WSF President, to invest in the Indian Squash Academy which has produced so many talented young players – including all the ones tonight.

“And Ramit was absolutely brilliant – his hands are world-class. Yet when he decided to go to the USA to study, I feared he might never play for India again. But because of his desire and the support from his parents he still continues to train over here – and the result are here for all to see.

“It was only a year ago that Ramit made a major contribution to India’s victory over favourites Pakistan in the Asian Junior Team Championship final – which resulted in our first regional title.”

In the earlier semi-final, favourites Egypt overcame England – but the second seeds surprisingly forced the tie into a decider after 17-year-old Emily Whitlock celebrated “my best win ever” by beating world junior champion Nour El Tayeb for the first time. 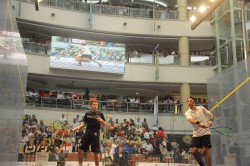 Marwan El Shorbagy, the rapidly improving world junior champion who now boasts a world ranking of 33, put Egypt into the lead as expected – but England’s Charles Sharpes stretched the match to four games before the 18-year-old from Alexandria claimed his 11-7, 12-14, 11-4, 11-6 win after 50 minutes. 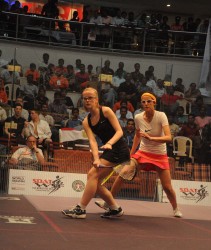 El Tayeb had won the three previous encounters with Whitlock and now boasts a world ranking of 18 after leaping to 12 three months ago. But it was a ‘new-look’ Whitlock, ranked 15 places lower, who took to the court on this occasion – and after 41 minutes of dazzling squash came away with an 11-8, 12-10, 11-9 victory, in all three games coming from behind.

England’s hopes of a place in the final were dashed however when the Egyptian number two Karim Abdel Gawad beat tall 18-year-old Declan James 11-7, 11-8, 11-9.

“There was a lot of pressure on that match – but it’s a dream that we’re now playing in the final,” said Gawad, the world No42 from Alexandria, afterwards.

Egypt coach Amir Wagih acknowledged that the tie had lived up to expectations: “Matches with England always have a special atmosphere, like last year’s senior World Cup final, and today was no exception. Emily played a great game which meant that all the pressure was on Karim.

“And I am so pleased for him because he just missed out on being able to play in the world junior championship by two days. He deserves to be in a world final – he’s a quality player.”

But the England camp were full of praise for Whitlock’s stunning performance. “It was huge,” said England coach David Campion. “The whole point of being here is to learn from this world class environment.

“This was the best win of Emily’s career – and the fact that she did it here in this world arena makes it even more special.” 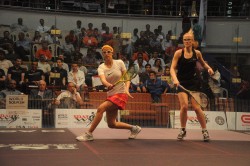 Whitlock herself could barely contain her delight – particularly after a debut earlier in the week which had left the European junior champion less than pleased with herself: “It’s awesome – I just can’t believe it. It’s definitely my best win ever. I’ve been really nervous recently.

“I know it’s a team event, but she was 12 in the world and I beat her! Maybe I really am quite good after all!

“Nour is actually a good friend of mine and she said to me when we arrived in Chennai that I should relax more – ‘you’re 33 in the world and you could beat people in the top 20’ she said.

“It’s shame I didn’t beat her in last year’s world junior championships – but I just wasn’t good enough then. I just didn’t believe in myself – but I know I’ve improved a lot since the British Junior Open last month,” concluded Whitlock.