The event boasts a record entry of 26 nations and is being staged simultaneously at both the eight-court Club des Costières and La Parnasse Arena where, for the first time ever, action is taking place on three all-glass show courts. 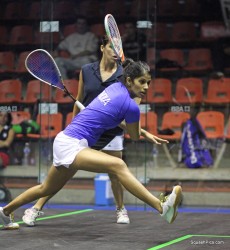 Teams have been fighting for the top two places in the eight pools to ensure themselves a place in the last 16 knockout stage.

In the final match, top-ranked Argentinean Antonella Falcione battled hard against India’s star Dipika Pallikal – but world No13 Pallikal had the edge, defeating her opponent ranked more than 100 places below 11-8, 11-7, 11-8.

“It’s huge,” said Indian National Coach Cyrus Poncha when asked the significance of the success in the event so far. “Our aim was to top the pool – and making the quarter-finals is our goal. 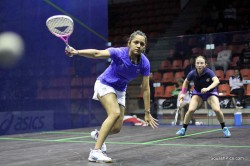 “Beating Ireland definitely gave us a lot of confidence and we hope to have a great performance against the Dutch tomorrow.”

Incredibly, this is only India’s third appearance in the women’s world championship, with an 18th place finish in their debut in 2002 and 11th last year.

“Last year it was a first for us to finish in the top eight in the men’s world team championship – so if we can make the top eight here this year it will be a huge achievement and another significant step forward for Indian Squash,” concluded Poncha. 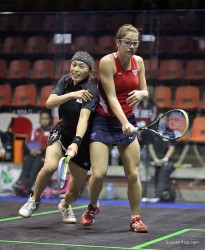 USA bounced back from the disappointment of a 3/0 loss to New Zealand yesterday to beat Japan today to finish in second place in Pool E.

Team coach Chris Walker, a former England captain, was pleased with his largely inexperienced squad’s performance. “We knew it was going to be tough, but Olivia was clinical and sound, playing the best she’s been all week to put us ahead.

“This took some of the pressure off Sabrina who played a fine game to see us through.

“The beauty of having this young squad is that they are gaining important experience and learning all the time.”