Two years after claiming a surprise place in the final of the WSF Women’s World Junior Team Squash Championship, sixth seeds Hong Kong China again upset the seedings in the 2011 World Squash Federation event in Boston, USA, to earn a semi-final berth at the Murr Center at Harvard University. 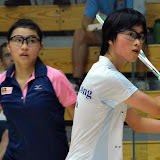 In the all-Asian tie against Malaysia, it was the fourth seeds who took the opening honours as Tan Yan Xin beat Hong Kong’s Ka-Yi Lee in four games, before Choi Uen Shan levelled matters after beating Vanessa Raj. 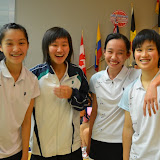 “We had a team meeting last night and the two younger players, who had lost to their number two and three, really wanted to play to have a chance of revenge,” Hong Kong coach Dick Leung told the official website www.worldsquash.org/worldjuniors2011 later. “We knew that it would be tough at number one, so we rested our number one to give the youngsters a chance and they played so well.

“I’m really proud of them – it’s amazing that such a young team (17, 14 and 15) should get to the semi-finals, and with the two youngsters winning the crunch matches it’s great for the future too.” 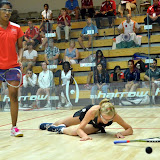 In a triumph described by national coach Cyrus Poncha as “very sweet”, India justified their status as third seeds by beating former champions England, the No4 seeds, 2/0.

India took the lead when Anaka Alankamony, the Asian Junior Champion, beat European Junior Champion Emily Whitlock. The Indian seemed to have the answer to everything Whitlock could throw at her, and essentially outplayed her for two and a half games to lead 6-2 in the third.

Whitlock then took control for the first time with a run of four points to level before winning the game to reduce the deficit. Alankamony built up a 9-4 lead in the fourth – and again Whitlock fought back. The Indian number one held her nerve, however, to close out the match 11-7, 11-5, 9-11, 11-9. 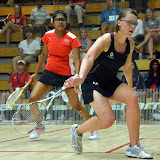 It looked as though Victoria Temple-Murray would pull one back for England when she established a two-game lead against Aparajitha Balamurukan – but the Indian number three fought back superbly, saving a solitary match-ball at 9-10 in the fourth before racing away with the fifth to delight the Indian bench and supporters with her 7-11, 6-11, 11-8, 12-10, 11-4 victory in 44 minutes. 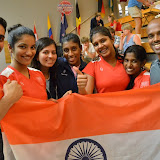 “England has always been a powerhouse in squash, this victory is very sweet,” exclaimed Poncha. “Anaka was extraordinary today, this is a warning sign to the rest of the world!

“Aparajitha showed great fighting spirit to claw back from two games down.”

Hosts USA secured their place in the semi-finals against India – but the second seeds had to work hard for their 2/1 win overNew Zealand, the ninth seeds. 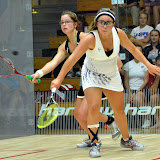 2010 world champion Amanda Sobhy put the home side ahead with an 11-6, 11-2, 11-7 win over Kiwi Megan Craig – but her younger sister Sabrina Sobhy was unable to close out the tie as Danielle Fourie drew matters level after a four-game win.

Order was restored when New Yorker Olivia Blatchford beat Rebecca Barnett 11-3, 11-7, 11-8 to clinch the US win.

“Amanda was impressive, but then their number three played very well,” explained US national coach Natalie Grainger. “”We never had any concerns that Olivia could do it, and she went about her job the way it was needed, a good performance.”