A commanding performance by India in today’s final qualifying tie in the SDAT WSF Under-21 World Cup saw the hosts crush Australia 3/0 to secure a place in the semi-finals of the inaugural World Squash Federation event at the Express Avenue Mall in Chennai.

Fourth seeds India will face France in Saturday’s second semi-final – while Pool A champions Egypt, 3/0 winners of all their qualifying clashes, will line up against England in the first semi.

It was the opening day of play at the Express Avenue Mall, the largest shopping complex in southern India – with all the action taking place on the new ASB GlassCourt, an all-glass showcourt featuring a pioneering new glass floor with under-floor LED lighting.

Lucas Serme kicked off France’s semi-final bid – knowing that a win would put his country at the top of Pool B, and a loss to Hong Kong would put the two countries and England, all with two wins, into a matches countback for the pool’s two semi-final slots.

And for the third time in three days, Geoffrey Demont found himself fighting for French honour with the tie poised at one-all. Once again the tall 20-year-old from Aix-en-Provence did not let his side down, giving his all for 33 minutes to beat Hong Kong’s 18-year-old Cheuk Yan Tang 11-6, 11-5, 11-5.

“We knew it would be very difficult for our girl, so we were relying on our two men,” said French team coach Philippe Signoret afterwards. “Geoffrey had to play the right game – and he did.”

Demont explained how he was able to deal with the pressure of an all-important decider for the team: “I tried to play it as if it was a PSA match – because when you lose, it’s all over. I imagined that I needed to win to get into the next round!

“I have learned to give it my best, as if it is the last game I play.

“If I think of the team, it’s too much pressure. It’s good that I am able to manage this pressure.

“But I was really happy to beat Ben (Coleman) yesterday,” continued Demont. “We knew each other well on the junior circuit. Yesterday was the best match I have played this season.”

The crowd in the seats surrounding the court – and overlooking the Express Mall atrium from four floors above – grew dramatically for the second tie when India took on Australia. 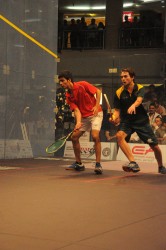 The hosts looked to be coasting to an early lead when top string Ravi Dixit, a ‘student’ at the city’s Indian Squash Academy, took a two-game lead over Queenslander Jamie McErvale and served at match-ball at 10-6 in the third.

But the 20-year-old Australian suddenly raised his game and forced the match into a further game. But Dixit regained his focus in the fourth and closed out the match 11-4, 11-3, 10-12, 11-9 after 58 minutes to put India into the lead.

“I was too confident after winning the first two games, and let my concentration slip,” admitted Delhi-born Dixit later. 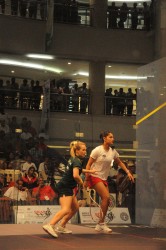 There was eager anticipation for the next tie when local star Dipika Pallikal, the 20-year-old from Chennai who has risen to a career-high world ranking of 14 after a sensational run of form in recent months, took to the court against Sarah Cardwell, the 20-year-old daughter of Australian legend Vicki Cardwell.

The Australian did everything in her power to keep the Indian’s play under control – but it was Pallikal who had the upper hand for most of the game, ultimately winning 11-6, 11-4, 11-5 to clinch victory for her team – and a place in the semi-finals.

“Last year I was a very junior player and I know I have improved in all areas of my game since then,” said Pallikal when asked to explain the difference in her play from the senior World Cup at the same venue last March.

“We’re all under pressure but we’re playing to win – and all of us in the team are agreed that the main thing is to enjoy playing and play good squash,” continued the Indian champion.

Pallikal was also full of praise for the court and the new floor: “It’s great and the lighting is a huge improvement. It’s where sport is going and we need more changes like this to make squash more popular.

“It’s also great to play in front of such a big crowd that a venue like this shopping mall attracts,” added Pallikal. “You wouldn’t see all these people at the Indian Squash Academy.” 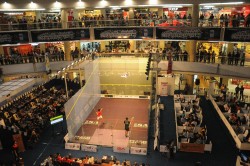 India’s national coach Cyrus Poncha was delighted with his team’s performance: “We did what the Indian cricket team couldn’t do.

“Dipika has become very focussed over the last few months – you can see it in her eyes.”

On his team’s semi-final prospects, Poncha added: “The French have beaten England, so we expect a tough match.

“We have never reached a final before in any WSF championship, so it’s something we’d really like to achieve.

“The WSF and its President Mr Ramachandran have done a great job in bringing this event to India, so it would be wonderful to do this at home.”

Earlier in the day at the Indian Squash Academy, England made up for the surprise defeat by France 24 hours earlier by beating Malaysia 3/0 – a win which ensured the second seeds a place in the semi-finals.

On an adjacent court, overwhelming favourites Egypt cruised to their third successive 3/0 win – and condemned eighth seedsGermany to their third defeat in a row.