The quarter-finals of the Hong Kong Open saw just one men’s match played out in full and more upsets in the women’s draw.

Top seeds James Willstrop and Nick Matthew will contest the semi-finals, Willstrop against Karim Darwish in a repeat of last year’s final, and Matthew against Ramy Ashour, the 2010 champion. In the women’s event top seed and defending champion will meet eighth seed Natalie Grinham and an unseeded finalist is guaranteed with Camille Serme and Omneya Abdel Kawy set to contest the other semi-final. 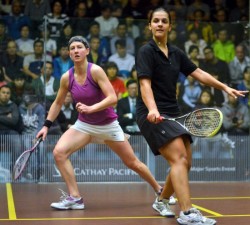 The unseeded Egyptian, who had already eliminated the second and tenth seeds in the competition, today lined up against No.6 seed Alison Waters.   The Englishwoman sits at No.4 in the WSA world rankings, but Kawy maintained her fearless approach from the beginning of the match to take the first game.  Waters hit back with an equally close second game win, before stretching out a larger lead to take the third.  Kawy, formerly a world No.4 herself, came back at the Englishwoman, denying her time on the ball and upping the pressure to claim the fourth and force a deciding fifth game.  The Egyptian seemed relentless in pursuing her semi-final goal, but Waters stayed in the contest until 8-all, when Kawy pulled away, and the deficit proved too much. 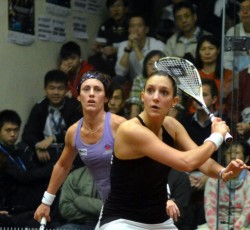 Kawy hasn’t reached a World Series semi-final since July 2011, but will now face eleventh seed Camille Serme in the next round.   Serme, whose last World Series semi-final also came at the Malaysian Open in July 2011, took just 28-minutes to defeat Rachael Grinham and ensure the extension of her Hong Kong campaign.  The young Frenchwoman dominated the opening exchanges and seemed largely untroubled until Grinham applied the pressure in the third.  The resilient Australian did enough to force a tiebreak, but was unable to capitalise and went down in straight games. 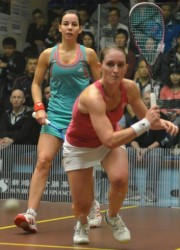 One Grinham sister did make it through to tomorrow’s semi-final round, as Dutch international Natalie Grinham defeated No.3 seedJenny Duncalf in four games.  With head-to-heads stretching back as far as 2002, Duncalf holds the better record, although Grinham had claimed four of their last six clashes.  A recent drop in form from Duncalf means that the Englishwoman hasn’t progressed past the quarter-finals of a WSA World Tour event in over a year.  A close early encounter went in favour of Grinham, but her opponent hit back with a hard fought tiebreak win in the second game.  The game seemed to have taken a lot out of Duncalf, and Grinham was able to claim a comfortable third game, before closing out the contest without much of a fight-back from the former world No.2. 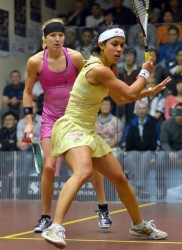 Grinham will have her work cut out tomorrow as she is drawn to play six-time Hong Kong Open champion Nicol David.  The Malaysian is yet to drop more than five points in a game so far in this year’s event, and was on lethal form as she dispatched Australian ninth seed Kasey Brown in 30-minutes.

But the day began with disappointing news when two of the event’s leading players were forced to concede their quarter-final matches after sustaining injuries the previous day.

Seventh seed Amr Shabana, the former world number one from Egypt bidding to win a sixth Hong Kong title, bruised his rib cage, while England’s Peter Barker, the No6 seed from London, strained a hamstring.

Shabana explained: “I fell during my match with Tom Richards, and didn’t think much of it until I went back to the hotel after the match where I had trouble breathing. I took pain killers in the morning with no improvement, and tried to have a light hit, which was a real struggle. The injury is on the left side of my rib cage, and I don’t want to risk making it worse or increasing the period of injury.”

Barker was equally downhearted: “I’m really gutted. I’m struggling today, and with the World Open coming up next week, I really don’t want to take any risks to pull my hamstring.” 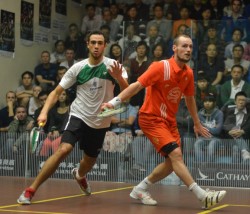 But the day’s play finished in sensational style when Ashour beat France’s No3 seed Gregory Gaultier in a match described by PSA SquashTV commentator Joey Barrington as one which ‘produced the best squash of the tournament between two of the sport’s heavyweights. Ramy dominated all the way.’

Ashour, the 2010 champion, dropped the opening game but thrilled the packed crowd with his artistry as he went on to take the next two and march on to match ball in the fourth.

Gaultier, however, fell badly when going for a ball at the front of the court and after receiving treatment on court hobbled of the court as the referee announced Ashour as the winner. 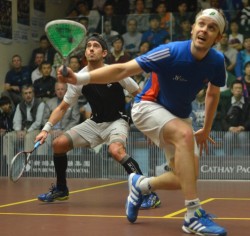 In the earlier quarter-final, a commanding performance from world number one James Willstrop saw the defending champion from England beat unseeded Spaniard Borja Golan 11-7, 11-7, 11-4 in 57 minutes.