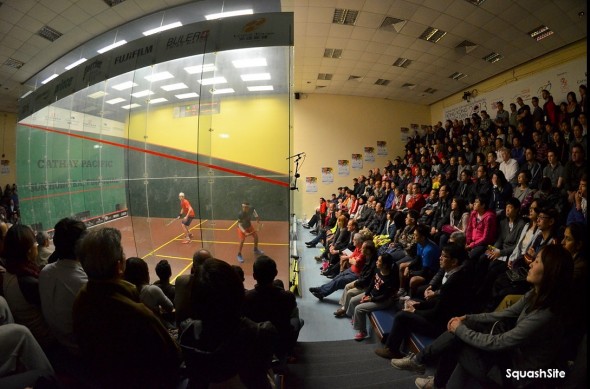 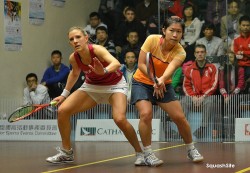 The Hong Kong number one, ranked 14 places below the No2 seed, went into the match 5-2 down in Tour clashes with Massaro since their first meeting in the 2008 Hong Kong Open. But Au had won two of the recent three meetings – including the most recent at the World Series Finals in London in January. 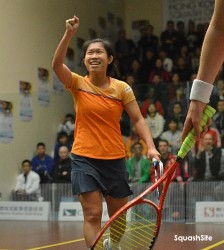 And, spurred on by the packed and partisan crowd, left-hander Au used all her skill and knowledge of the court to hold off her 30-year-old opponent, eventually winning 11-6, 11-5, 9-11, 11-9 in 50 minutes to earn a place in the semi-finals – when the event moves onto an all-glass showcourt at the Hong Kong Cultural Centre at the Hong Kong harbour.

“I feel really happy,” 24-year-old Au told www.sport-asia.com later. “The feeling is really great because for the second time I’ll be playing on the glass court in Tsim Sha Tsui. Last time it felt really amazing to play over there, so to get there a second time makes me really happy.

“This is definitely the biggest win of my career,” continued the 12th seed. “Laura has been performing really well for the past few months and now I beat her and I feel more confident in myself. My confidence is back because my ranking has dropped this year so I was a bit disappointed.” 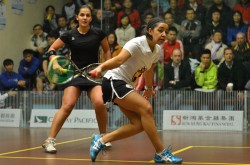 Au now faces Egypt’s Raneem El Welily, the third seed who was runner-up in her last appearance in the championship in 2011.

“Playing Laura was the expected thing, but obviously Annie played well,” said El Welily. “I haven’t played her in a long time and obviously she’s the crowd favourite so I hope I play well.”

The Alexandria-born 24-year-old will return to the Tsim Sha Tsui venue for the second time in three years. “It’s really beautiful there. It’s really nice. I can’t wait.” 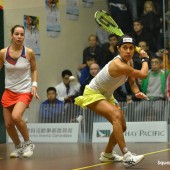 Malaysian star Nicol David extended her formidable record in Hong Kong by notching up her 43rd successive win in the event over the past decade. The world number one, going for a ninth title in a row, took just 24 minutes to see off England’s No5 seed Jenny Duncalf 11-4, 11-3, 11-3 in a repeat of the 2010 final. 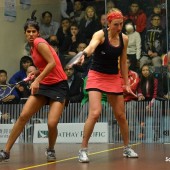 David will renew her rivalry with a second English opponent, Alison Waters, in the semis. Six times a quarter-finalist since 2007, Londoner Waters earned only her second ever semi berth when she beat surprise unseeded opponent Joshana Chinappa.

The 11-time Indian champion from Mumbai was celebrating her first ever appearance in the last eight of a World Series event after upsetting the No7 seed Natalie Grinham and 15th seed Line Hansen in the previous two rounds. 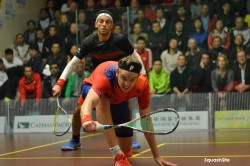 England’s 30-year-old former World No.1 James Willstrop recorded one of the biggest wins of his career when he fought back from two games down to beat higher-ranked 22-year-old Mohamed Elshorbagy in a dramatic two-hours-plusCathay Pacific Sun Hung Kai Financial Hong Kong Open quarter-final today at the Hong Kong Squash Centre.

The 2011 champion boasted a 9-3 career head-to-head record over the younger Egyptian before the opening match of the day in the eighth and final PSA World Series event of the year. But Elshorbagy won their most recent meeting at last month’s PSA World Championship in England and this month leapfrogged the Yorkshireman to celebrate a career-high World No.4 ranking. 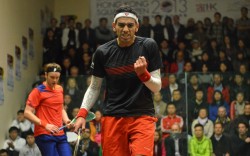 Fifth seed Elshorbagy took the opening two games – a deficit from which Willstrop had never before recovered in previous meetings. But the experienced Englishman – a full-time pro since 1999, when his opponent was eight years old – dug deep to draw level.

The match was the longest of Elshorbagy’s career – and only beaten in Willstrop’s 14-year PSA career by a 127-minute semi-final battle against compatriot Nick Matthew in the 2010 Canary Wharf Classic in London.

“It was a tough match – and that’s part of the sport,” admitted Willstrop later. “I’ve got to do as much as I can to recover as quickly as I can – it’s a big challenge over the next 24 hours! 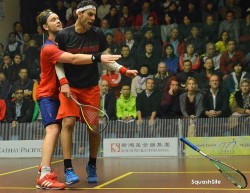 “It was a really close match – we were very tightly-matched. It was so close all the way – no player had any dominance at any stage, which is very unusual as you usually get a phase where one player gets a lead but there was hardly any of that.

“I think we were both at the top of our games, both playing some quite brilliant – and tough – squash.

“I’m happy to have won the match – there are a lot of positive thoughts.”

The event now moves onto an all-glass showcourt at the Hong Kong Cultural Centre at the harbour – where Willstrop will face surprise opponent Borja Golan. 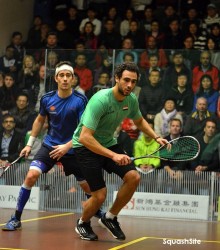 The seventh-seeded Spaniard dropped the first two games to top seed Ramy Ashour – but the defending champion from Egypt then clearly suffered a recurrence of the hamstring injury which thwarted his world title bid in November.

Having lost the third game for just a single point, Ashour was 7-0 down in the fourth when he offered his hand to Golan and departed quickly from the court.

“The last part of the game was not the best,” said World No.7 Golan after the 5-11, 5-11, 11-1, 7-0 (ret.) win in just 24 minutes – which takes him into his second successive PSA World Series semi-final. “When you respect a player like we all respect Ramy it is tough. He is such a talented player and that is the last way that I want to win a match. 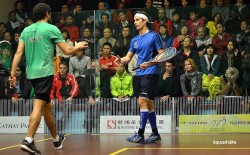 “I hope he is soon on the court – but for a long time, not just a few tournaments.

“I had to change my game and try to play a little bit more to the front after he got his injury because I knew he would struggle more there. I had to do my job and keep going and I knew that in the third and fourth games that I had to keep going. You could see he was moving worse and worse every point.”

On his semi-final match, Golan added: “James is such a professional guy and such a fighter, he can dig in and dig in for such a long time. He has more experience in these kind of matches than me so I just have to stay focused and play my game and hopefully I can do well tomorrow.”

The other semi-final will be the clash predicted by the draw, between fourth seed Nick Matthew and second seedGregory Gaultier – a repeat of last month’s World Championship final. 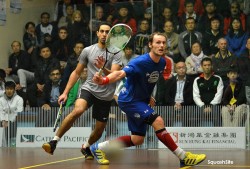 “The match was very tough,” said World No.2 Gaultier. “To win 3/2 is never easy. Tarek is a very tough opponent and he moves fast and has great skills and you have to be alert.

“I played a bit stupid in the fourth game when I was up 9-6 but he came back strong and made no mistakes. I was glad I imposed my game in the fifth and I’m just happy to go through with this win.

“I’m in the semi-final and I just want to do my best,” added the 30-year-old from Aix-en-Provence, four times a runner-up in the championship. “I would really like to win this tournament and finish the year on a positive note. But there is still a match tomorrow which will be really tough so I just need to get my recovery right and we will see tomorrow what will happen.”