“The final was certainly the best match of the tournament, with two vibrant games in the beginning that perfectly defined what was going to be Miguel Rodriguez’s second victory in his third final of the Colombian Squash Open,” said tournament spokesman Juan Carlos Santacruz.

Tuominen, the world No25 from Helsinki, forced his opponent to all corners of the court to win the opening game. But Rodriguez showed more patience in the second and, at nine-all, played two cross-court winners to tie the match. 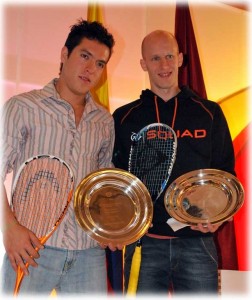 “Without doubt, this game was a turning point in the match,” said Santacruz.

Maintaining his pressure and forcing Tuominen to make errors, Rodriguez rook the third game in just eight minutes as the crowd sensed a possible local triumph.

At 3-2 up in the fourth, Tuominen became increasingly frustrated and committed eight unforced errors in a row to give the 24-year-old world No32 from Bogota – Colombia’s highest-ranked player of all-time – the advantage.

The victory marked the Colombian’s second title success in the event since 2008.

Home hero Miguel Angel Rodriguez earned a surprise place in the final of the Colombian Open after an injury forced his higher-ranked opponent Shahier Razik to withdraw from their semi-final match in the $30,000 PSA World Toursquash event at Club El Nogal in the capital Bogota.

The third-seeded Colombian frustrated Canadian Razik, the second seed, throughout the first game and quickly went one game up for the loss of only three points.

In the second game, Razik showed his brilliance to tie the match at eight-all, after Rodriguez made three consecutive errors. 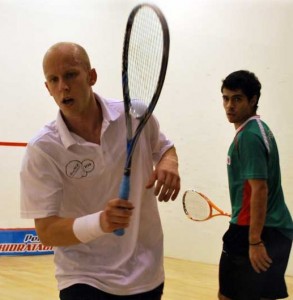 However, increasing discomfort from a gluteus strain caused 32-year-old Razik to concede the match before the third game, giving Rodriguez a 11-3, 11-8 (ret) win which takes the 24-year-old from Bogota into his home country’s Open final for the third time in five years.

While Rodriguez is celebrating his 22nd appearance in a PSA Tour final, former world No10 Tuominen is marking his 16th – and each is looking for a third Tour title success of the year.

Sixth-seeded Mexican Arturo Salazar upset fourth seed Rafael F Alarcon in a marathon quarter-final match in the 2010 Colombian Open to claim an unexpected place in the last four of the $30,000 PSA World Tour squash event at Club El Nogal in the capital Bogota.

Salazar moves on to face top seed Olli Tuominen in his second meeting this year with the Finn. Tuominen, ranked 25 in the world, bounced out Czech number one Jan Koukal 11-9, 11-5, 11-6.

Twin brother Cesar Salazar will not be joining Arturo in the semi-final line-up. The No8 seed went down 11-6, 11-6, 11-5 to second-seeded Canadian Shahier Razik.

The 32-year-old from Toronto will now face local hero Miguel Angel Rodriguez, the third seed from Bogota who won the title two years ago.

The 24-year-old Colombian reached the semi-finals for the third year in a row when he defeated Italy’s fifth seed Stephane Galifi 11-6, 11-8, 11-3.

Top-ranked Colombian Miguel Angel Rodriguez made swift work of reaching the quarter-finals of the 2010 Colombian Open by defeating his opponent in just 24 minutes in the opening round of the $30,000 PSA World Tour squash event atClub El Nogal in the country’s capital Bogota.

Third seed Rodriguez, who celebrated his maiden Tour title at the event in 2008, delighted his loyal fans by despatching unseeded Canadian Robin Clarke 11-5, 11-9, 11-7. The 24-year-old from Bogota will now face fifth seed Stephane Galifiin a bid to make the semi-finals on his home club’s courts for the third year in a row. 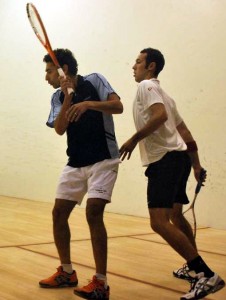 Razik, the 32-year-old from Toronto who will lead Canada’s medal bid in next month’s Commonwealth Games in Delhi, will now face eighth-seeded Mexican Cesar Salazar – who also prevailed in a five-game battle, beating Finn Henrik Mustonen 9-11, 13-11, 11-6, 4-11, 11-5.