National wild card Christopher Gordon, ranked 72 in the world, celebrated a dream result for the hosts of the Delaware Investments US Open when he upset world No15 Hisham Mohd Ashour in the first round of the PSA World Seriessquash event at Drexel University in Philadelphia to mark his first ever World Series win. 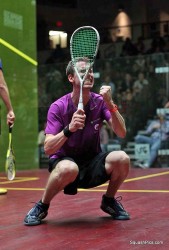 The 26-year-old from Hartford was visibly overwhelmed with his victory, dropping to his knees with emotion as he won the final point against the talented Egyptian. 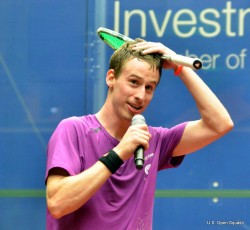 “I’d like to say a huge thank you to US Squash. I wouldn’t be out here if it wasn’t for them. They gave me huge confidence by giving me a wildcard and helped me in my dream,” said Gordon, who began his quest for success in PSA World Series events at the 2003 Tournament of Champions in New York.

After the win which produced only the second home player to make the last sixteen of the US Open since 1994, event spokeswoman Kristi Maroc said: “A huge win in his career, and a significant achievement for any player to beat an opponent over fifty places ahead in world rankings, the win will go down in the books as an important moment for squash in the United States.”

Kevin Klipstein, the CEO of US Squash, added: “It’s a great win for Chris. We’re extremely happy for him, and we expect even greater things for him in the future. It’s great having a wildcard pull through. It’s a big breakthrough and we wish him luck in the next round.” 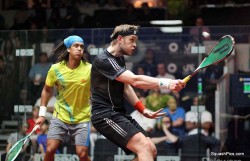 Earlier, top seed and world number one James Willstrop opened proceedings on the all-glass court against Alister Walker – the world No12 from Botswana who has had several close matches with the Englishman. But, with a 10-0 head-to-head record, Willstrop started the firm favourite.

Relatively untroubled in the first two games, Willstrop opened up a 2/0 lead before Walker struck back to take the third. But it was the favourite who went on to make the second round, winning 11-4, 11-3, 7-11, 11-9 in 80 minutes. 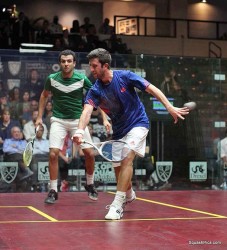 Willstrop’s next opponent will be England team-mate Daryl Selby, the world No11 from Essex who defeated Egyptian qualifier Omar Abdel Aziz 11-5, 11-9, 12-10.

“If someone had offered me 3/0 before the start I’d have taken it, even though there were some things I could have done better,” said the 29-year-old Englishman. “I can do better – and I’ll have to against James, but at least I have a chance to do that!”

Hopes of further English success on the day were dashed by Spaniard Borja Golan. But the world No16 had to battle for 76 minutes to overcome London-born Joe Lee, the lowest-ranked qualifier in the event, 8-11, 11-9, 11-6, 11-5. 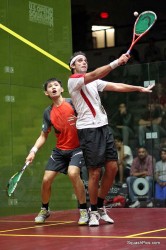 “It’s my first real tournament since El Gouna,” said the 31-year-old from Cairo. “We had a baby, spent some time in the US, training back in Egypt and I was injured in the Malaysian Open, so it’s been a long time since I’ve been on court feeling right!

“The first match in any tournament you’re always a bit nervous, especially in a big tourn

“I love the venue, I love playing in the US, they take care of us so well here. My aim for any tournament is to play as well as I can and win it, so I’ll be trying my best for the rest of the week.”ament like this, and against someone like Max who is improving all the time it was never going to be easy.

El Shorbagy, the 21-year-old No8 seed, survived a closely-contested battle against Germany’s Simon Rosner. The Egyptian took the lead, but Rosner levelled – then, early in the third, required treatment on his back. 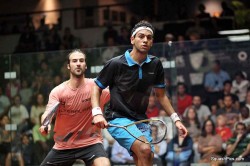 “I’ve seen some of Simon’s recent matches where he’s had good results, so I knew it was going to be tough,” said the relieved world No8 from Alexandria. “When we had that break I took the time to think about my tactics and I managed to play well enough to win the next two games.”